Anxiety-Based Aggression Among Dogs at Home

When Duchess and Bambi first came to the NorthStar VETS Behavior Service, their owner, Jen, wasnât sure if she would be able to keep both of her girls. Although the two dogs had occasional fights since they were each adopted 2 years earlier, recently their fighting had gotten to the point where Jen was beginning to worry about their safety and the safety of her young son. The other pets and people in the house were all walking on eggshells in response to the tension between the two dogs.

First Visit
When Duchess and Bambi first came to see me, they were still recovering from their last fight. That fight was especially scary because it happened at night, in the dark when Jen invited Bambi to join her and her son and the other pets, including Duchess, in the bed. Not only were both dogs injured, but when Jen’s husband reached in to separate the dogs, he was bitten. Other fights had happened when the dogs got excited about having their harnesses put on before walks, on the stairs when one dog was going up and the other was going down, when putting new collars on the dogs and when trying to clean off Duchess’ backside.

The thought of rehoming either one of the dogs was heartbreaking to the family. Not only did the people in the house love Bambi and Duchess, but the two dogs really did like each other. Between fights, they played with each other and could often be found sleeping curled up together. When Jen tried separating the dogs to prevent fights, they would start to miss each other.

When I met Duchess and Bambi, I quickly realized that they were both sweet, but anxious dogs. Bambi was somewhat afraid of strangers and would also get worried and react if her owners tried to tend to her injuries or if there were problems putting on her harness. Duchess would get anxious as well when Bambi was getting worried about these things, and she was uncomfortable about being touched by people or dogs from behind.

At our first meeting, Jen was given a treatment plan that included recommendations on how to avoid situations that could make either dog anxious, including trying to have them sleep in crates rather than on people beds. Additionally, we discussed how to safely break up dog fights, should another fight occur. We also talked about doing some training with the dogs so Jen, her husband and even her son could have ways to redirect the dogs’ attention away from each other or things that make them anxious. In addition, Bambi was started on a medication to lower her anxiety. Bambi was worried about many different things and her anxiety would feed into Duchess’ anxiety and aggression.

Post-Visit Success
Within a couple of weeks of our initial appointment, Jen was already seeing improvement. Jen reported that “Bambi is a less anxious version of herself.” For the first time, Bambi would go into her crate without screaming and urinating on herself. This meant that the dogs were no longer trying to sleep in peoples’ beds. 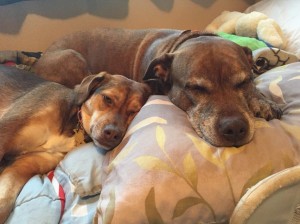 Second Visit
Six weeks after that, Duchess and Bambi came in for a follow up appointment. They were both less anxious at this appointment than the first time we met. At home Bambi was generally less anxious and there had been no more fights. Since Duchess was still showing some anxiety towards Bambi, she was also started on medication after this appointment. We were also able to talk about some specific behavior modification strategies to address the few remaining situations that caused tension between the girls.

Life at Home Today
Three months after the initial consultation, Jen reported that there had been no more fights between the girls. The family are all careful to watch the dogs’ body language and know how to diffuse situations if they seem tense. Bambi continues to be ‘a new dog’ and Duchess is less on edge. They’ve been getting along so much better, that Duchess let Bambi join her to nap on Jen’s son’s bed and pose for this picture!

If your pets have difficulty getting along, contact NorthStar VETS to schedule an appointment with the Behavior service.