Born in Mississippi, little Louie suffered trauma around two weeks of age when his own mother bit his head for unknown reasons. The injury caused multiple fractures to Louie’s jaw and skull which led to irregular facial growth, and a large palatal defect (an open hole between the roof of his mouth and nasal cavity). 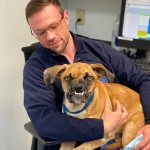 Multiple attempts were made by doctors to correct Louie’s injuries before his adoption into a new home in New Jersey. Louie’s new humans eventually brought him to see the Dental and Oral Surgery team at NorthStar VETS around five months of age. A multi-step plan was put into place to correct his most severe issues. In one of his first procedures, a CT scan was performed and some damaged teeth were removed. The scan provided additional images of Louie’s mouth and clarified the way for the next phase of surgery. Six weeks later, tissue flaps were developed and a bone membrane was implanted to enclose the hole, and at his four-week recheck, everything was healing nicely!

We are happy to report that Louie can now move forward to live his best and happy life.