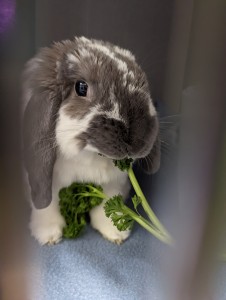 Puffy ate a lamp cord which resulted in electrocution and ingesting many tiny pieces of toxic copper. The hundreds of small wires risked perforating her GI tract, causing a toxicity, destroying her red blood cells, and putting her other organs at risk for shutting down. The shock she received when eating the wire also caused fluid to build up in her lungs. The challenge was that if chelation therapy were started before the metal passed through her intestines, the treatment would leach more copper into her blood causing additional red blood cell destruction and organ shut down. She was brough to the Avian and Exotics team at NorthStar VETS. A blood donor gave Puffy a much-needed transfusion since her PCV was 12% (normal is closer to 35-50%). Miraculously, the hundreds of metal fragments passed without getting stuck or breaking through the intestines, so chelation therapy could be started, which rid her of the rest of her toxin. Puffy is currently no longer anemic and her organs suffered no permanent damage. She is now home where her family reported she is back to her mischievous self again.