It was a terrible day for Rico. A fire broke out in his home, exposing him to smoke inhalation and causing great fear. When the firemen came into the house to put out the fire, Rico ran by them out of the house. As he got farther away from that danger, he ran into the street and was hit by a car. 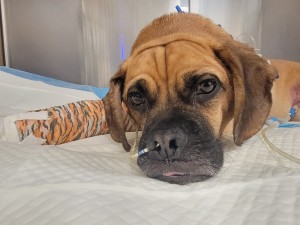 Immediately, he was brought to NorthStar VETS where the Emergency team evaluated his extensive injuries. He had a broken forearm and back leg which would require surgery, in addition to three pelvic fractures, pulmonary contusions (bruising in his lungs), a hemoabdomen (blood in his belly due to an injury on his liver), and numerous cuts and scrapes. During his eleven-day stay, the Surgery and Anesthesia teams repaired his broken bones while the Critical Care and nursing teams helped him heal and recover from his other injuries. 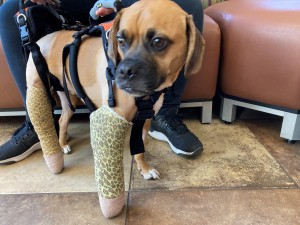 Fortunately, things are better for Rico. He is finally back with his family and feeling much better. Once he gets his casts off, life will go back to normal.