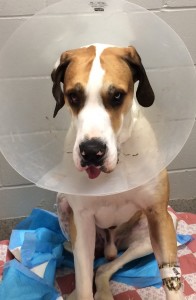 Opie is a two-year-old Great Dane recently referred to NorthStar VETS. Opie had been favoring his right rear limb for a few months and then became acutely more lame after playing outside with his housemate. Initial radiographs and exam suggested rupture of his ACL. However, when another X-ray of the knee was taken we became suspicious of a condition known as Osteochondritis Dessicans (OCD). This condition typically occurs in young growing dogs and is due to abnormally developing cartilage and bone. As a result a weak spot forms in the joint causing pain and lameness. 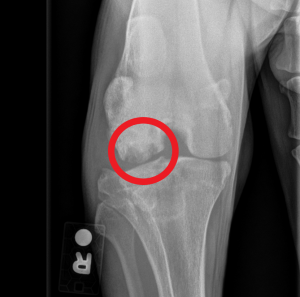 Dr. Daniel Stobie and Dr. Kelly Johnson of the NorthStar VETS Surgery team performed an OATS procedure (Osteochondral Autograft Transfer System) on Opie’s right stifle. This is a procedure where a plug of normal cartilage and bone is collected from another site in the joint. The plug is then placed in the site of weakened cartilage to help restore and heal the joint surface. The procedure went well and Opie will be seeing our Rehabilitation Department to help him heal and strengthen his new joint! 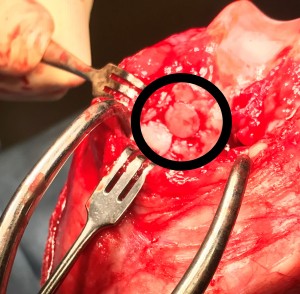 Figure 1: The circular piece of bone in the center of the image was removed from a nearby piece of bone and inserted into the defect in the knee.

OCD (osteochondritis dissecans) is a defect in Endochondral ossification that commonly affects large to giant breed dogs. (Interestingly, it also affects pigs and turkeys – animals that grow rapidly in a short period of time to get them to market weight). When dogs are born, their bones are essentially all cartilage that slowly gets replaced by bone except for the surface of the joint which remains hyaline cartilage. These dogs have a genetic defect where a portion of the subchondral cartilage does not turn to bone and creates a weak spot. Therefore, the cartilage lining the surface of the joint doesnât have bone underneath it. As the dog bears weight, the cartilage cracks and the subchondral cartilage that didnât turn to bone dies and this creates pain, lameness and a weak spot on the joint surface. In the past, we would just remove the dead bone and cartilage creating a defect that would heal in with fibrocartilage. Now with these osteoallografts, we can essentially replace the diseased area with almost near normal tissue (see figure 1). 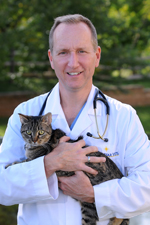 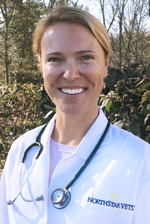 Dr. Kelly Johnson is a Vermont native who received her undergraduate degree from the University of Richmond in 2002. She earned her veterinary degree from Michigan State University in 2006. After graduation she completed a small animal rotating internship at the Hope Advanced Veterinary Center in Vienna, VA followed by her surgical residency at the Virginia-Maryland College of Veterinary Medicine. During her residency she also completed a Masterâs Degree in Biomedical and Veterinary Sciences. Dr. Johnson practiced as a small animal surgeon in northern NJ for nine years before joining NorthStar VETS in 2020. 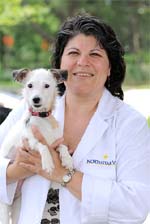 Dr. LoScrudato earned her certification in veterinary acupuncture in 2009 from the Chi Institute. Dr LoScrudato started the Acupuncture service at NSV in 2009, giving our hospital another avenue to improve our patients’ comfort and function. Beginning in 2011, she transitioned from our ER department and dedicated her time to building the rehabilitation and pain management service at NSV along with Dr Pamela Levin. She completed her certification as a canine rehabilitation practitioner from the University of Tennessee College of Veterinary Medicine in 2012. Dr LoScrudato was certified in companion animal pain management in March 2015. She considers her greatest achievements her four beautiful children. Dr LoScrudato enjoys music, spending quality time with her children, and fishing.