Does your cat go out all night long and come back in the morning? Â Our special friend also enjoys this…

Meet Gray! He is 1.5 years old and adorable. 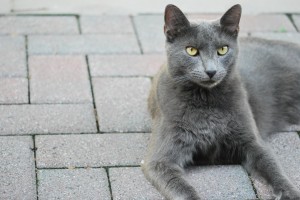 Gray presented to NorthStar VETS after being diagnosed with acute renal failure by his regular veterinarian. Â His condition was fatal, and emergent. Upon arrival his fate would be in the hands of our Internist, Dr. Tammy Anderson.

Acute Renal Failure (ARF) is characterized by an abrupt shutdown of kidney function, most often accompanied by oliguria (reduced urine production). The primary causes of ARF in cats are: urinary obstructions, infectious diseases, trauma, and the ingestion of toxins – the most common one being ethylene glycol which is contained in antifreeze. ARF is extremely serious and can quickly become fatal. Immediate veterinary treatment is imperative. Though the prognosis is usually poor, if damage has not been too severe and medical treatment is aggressive, it may be possible for normal kidney function to be restored.

Two days before Gray came in he had been outside all night, and when he returned he was lethargic and was hiding.Â  During the time of presentation, Dr. Anderson was concerned that he had renal failure due to a toxin such as ethylene glycol (antifreeze) or infection.Â  Grayâs renal values were elevated to 11.3 (very high!) and it was also considered that this was due to dehydration.Â Â  Further, his high potassium levels also suggested a urinary obstruction, however this was less likely because he was able to urinate without any difficulty.

Given the urgency Gray was placed on aggressive IV fluid therapy and given calcium gluconate to protect his heart from developing an arrhythmia (irregular heart beat) secondary to the high potassium. He was also placed on broad-spectrum antibiotic therapy.Â  During Grayâs ultrasound he showed dilation of his renal pelvises, which could be consistent with pyelonephritis (infection in the kidneys that is only potentially treatable)Â or increase in pressure such as is seen when animals have a urinary obstruction.

Gray responded very well to medical therapy (IV fluids and antibiotics.) His renal values returned to normal andÂ his urine culture was negative. Â He wasn’t out of the woods yet though. Â Gray still required 24 hour veterinary care, and would need to stay at NorthStar VETS until he became more stable.

Grayâs owners applied for a grant from Vet-I-Care and were able to keep Gray under Dr. Andersonâs care.Â  By the time of discharge, Grayâs creatinine and electrolytes were normal and he was eating well. 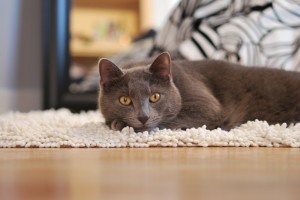 He was rechecked 10 days later and found to be doing just fine. Â Thanks to his attentive owners, Gray’s regular veterinarian andÂ Dr. Anderson from NorthStar VETSÂ Gray is safe at home with the rest of his family.