From the Client Perspective: Tucker

Heather searched Petfinder every day for over a year looking for just the right dog. It wasnât until an ordinary Saturday morning that she was headed to Costco, that an “Adoption Day” sign outside of PetSmart reeled her in. She saw Tucker immediately and fell in love. His big ears and sweet, lovable personality stole her heart. She stood there holding him for over two hours when the people running the adoption said, “Ma’am, you’re going to have to make a decision, we have to hit the road in about 15 minutes.” They only accepted cash so Heather bolted across the parking lot, hit up an ATM and minutes later, Tucker was hers.

At home, Tucker proved to be an extraordinarily sweet dog with a passion for the outdoors. Squirrels, rabbits and deer were daily visitors and Tucker could chase them all day. Heather said the hardest thing about training Tucker was that he wasn’t food motivated, “he learned how to open the front door as a pup and would run around the block for hours! Neighbors would bring out an entire rotisserie chicken and he still wouldn’t come. He thought it was all just a fun game!” Life with Tucker was great as the next nine years went by, and now they’ve added Adam, Heather’s fiance, to their family. Tucker is a part of everything that they do.

One day after work, Heather and Adam came home and found Tucker upstairs laying on the bed having trouble breathing. “His tail was wagging, but he was working so hard to get air.” They took him outside for a walk hoping they were overreacting, but his breathing was still restricted. His nostrils were flaring, the rise and fall of his chest was off, and he was coughing intermittently. Heather and Adam knew something was wrong. “We stayed awake the entire night watching over him. We knew our vet’s office opened up at 9am, so at 8:30am we began calling every three minutes until someone answered.” 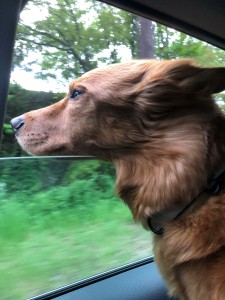 “We explained what was happening and they told us to come in right away,” Heather said. “We took a video of Tucker’s breathing to show the doctors and after listening to his chest, they took him back for an X-ray.” The doctor came out a few minutes later and said, “I’m so sorry, there is something in his chest.” Heather and Adam were devastated. Their vet recommended that they bring him to NorthStar VETS. Heather called to to let them know they were on their way. The family of three got back into their car and made the trip to Robbinsville. “I was sobbing the entire way,” said Heather. 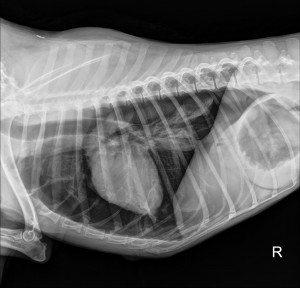 Air was escaping into Tucker’s chest, creating a life-threatening situation. 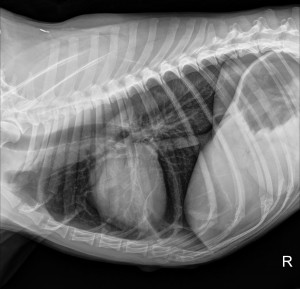 Tucker had his chest tapped, which means that air was removed from his chest allowing the organs to sit properly again.

When they arrived at NorthStar VETS, they were greeted at the front desk and a technician was out within seconds to get treatment started. “Everyone was warm and reassuring to us, which gave a sense of comfort that we brought him to the best possible place.” Heather and Adam were taken to an exam room for privacy as they were visibly upset. Dr. Laura Tasker of the Emergency and Critical Care team came in and explained what had happened. Tucker had a pneumothorax, which is a dangerous condition where air escapes from the lungs and fills the chest cavity. Dr. Tasker calmly explained that a chest tap was necessary, which is a procedure where they remove the air with a needle, to give him some relief and allow the organs to re-expand. Heather said, “Dr. Tasker was so patient and kind. You could immediately feel her love of animals and knew that she wanted what was best for Tucker.” Heather and Adam trusted her and agreed to the chest tap.

Dr. Tasker returned to the exam room and said that the procedure went well but that unfortunately, she was concerned that it would happen again. She reviewed the potential causes of a pneumothorax. These range in severity from cancer to tiny blisters that form on the lungs called blebs or bulla. She reviewed the corresponding treatments, recovery times and life expectancies associated with each. Heather and Adam were devastated about the possibilities. They asked a ton of questions to better understand and Dr. Tasker stayed with them as if she was family. “She was better than any human doctor I’ve ever had. I could feel her heart hurting for us, so I trusted her expertise and opinions.”

Dr. Tasker called them into another room to review the before and after X-rays. She explained that Tucker had to be admitted overnight and that a CT scan the next morning would diagnose the cause and provide better direction with what options Tucker had.

Before they left for the night, a technician brought Tucker to them again. “It was an emotional moment for us,” said Heather, “we werenât sure if it would be the last time we saw him.”

The next morning, Heather and Adam received a call from Dr. Steven Berkowitz of the Emergency and Critical Care team. Dr. Berkowitz said that he did well overnight and that they should expect a call from the surgeon at noon to discuss the CT results. He advised that it would be ideal to make a decision quickly. Tucker would be under anesthesia and that if he needed surgery, which was highly likely, they wanted to limit the risks of sedation. “Our number one priority was quality and longevity of life” Heather recalled.

Dr. Barri Sarowitz of the NorthStar VETS Surgery team called Heather and Adam a few hours later and explained that there was no mass or cancer, which was a huge relief. She said that it was blebs on his lungs and that they had to open Tucker’s chest to find and remove the source of the leak. The surgeon allowed them a few minutes to discuss it privately and only a few minutes later Heather and Adam called back and said, “do the surgery.”

About five painstaking hours later, the doctor called and said that the surgery went well and that he had come out of the anesthesia. The surgeons removed two lung lobes where the air was leaking into the chest. They said they would keep him for at least a night or two to recover. Heather and Adam were so relieved, “it felt like the first breath we had taken in days,” Heather said.

Tucker stayed in the Intensive Care Unit with Dr. Berkowitz for continued monitoring. “Dr. Berkowitz called us regularly with updates. We knew Tucker was being well taken care of by the way Dr. Berkowitz talked about him. He explained his personality and details of what he was doing, which every dog mom knows is so important to hear.”

They kept close tabs which Heather said, “the doctors and staff didn’t seem to mind at all. They all were so kind.” Heather said that she will never forget the call she received from Dr. Berkowitz only two days after his surgery. “I was at Bed Bath and Beyond and when I saw the number, I was so hopeful it was the good news we were waiting for. He called to say that it was time to take him home! I told Dr. Berkowitz that I loved him and for sure, did a little dance right there in the aisle!” 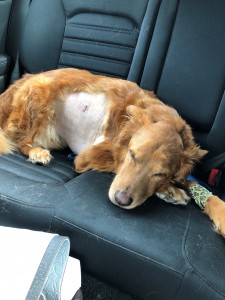 When Heather and Adam got to NorthStar VETS, Dr. Berkowitz came out to greet them. He went over the medications Tucker would be on and gave instructions for caring for him at home post-surgery. “Dr. Berkowitz was so wonderful. He felt like family and was so patient with all of my questions. He let us know exactly what to expect which was really helpful. Tucker came out a few minutes later and we were headed home to be a family again.”

Today, Tucker is getting back to normal at home. “We’ve made accommodations for him,” said Heather. “We’ve been sleeping with our mattress on the floor so Tucker can still be with us at night. We’re still trying to keep him from getting too much activity, which is truly the hardest part. He’s going for walks again and loves laying in the grass in his t-shirts! We’re so grateful to the team at NorthStar VETS for their expertise, compassion and for allowing us to continue our life with Tucker!” 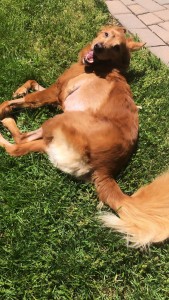 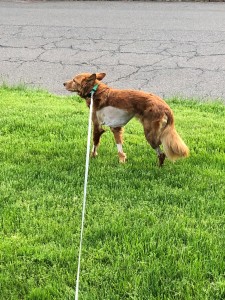 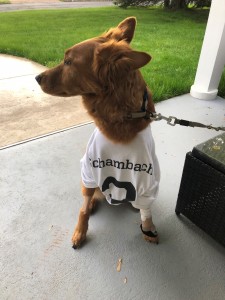 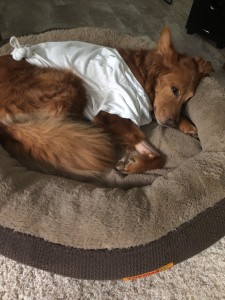 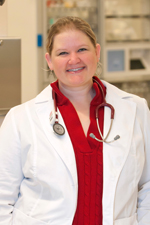 Laura Tasker, DVM, CVMA
Dr. Tasker earned her bachelor of science degree in animal science from the University of Delaware. She continued her veterinary studies at Ross University School of Veterinary Medicine, with a year of clinical training at Colorado State University College of Veterinary Medicine. She completed an internship in emergency and critical care at the Veterinary Specialty and Emergency Center in Levittown, Pennsylvania. Her professional interests include trauma stabilization, wound care, and metabolic diseases. She is certified in both large and small animal veterinary acupuncture, and has a particular interest in pain management. Outside of NorthStar VETS, Dr. Tasker enjoys spending time with her family and friends, playing with her Australian Shepherd, and all things horses. 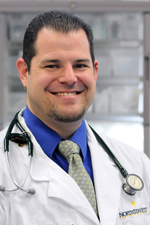 Steven Berkowitz, DVM (practice limited to emergency and critical care)
Dr. Steven Berkowitz attended St. Georges University and did his clinical year at the University of Illinois. Berkowitz joined NorthStar VETS after serving as the Chief of Emergency and Critical Care at another specialty hospital. Prior to that, he completed a three-year residency in Emergency and Critical Care medicine at the Oradell Animal Hospital in Paramus, NJ. His residency was completed at one of only a few recognized veterinary trauma centers in the United States. Prior to his residency, he was a staff Emergency Veterinarian at Animal Specialty Center in Yonkers, NY as well as serving as an emergency doctor at Animal Emergency and Referral Associates in Fairfield, NJ for 3 years. Dr. Berkowitz can be seen on seasons 5 and 6 of “Animal Precinct” on Animal Planet, which was filmed during his internship at The Bergh Memorial Animal Hospital of the ASPCA in New York City.
Dr. Berkowitz has special interest in the management of metabolic and endocrine derangements, trauma, as well as management of the septic patient. 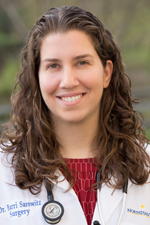 Barri Sarowitz, VMD, DACVS
Having grown up in south Jersey, Dr. Sarowitz is excited to join the surgery team at NorthStar VETS. Dr. Sarowitz obtained her Bachelor of Arts in Biology from Cornell University in 2007. She moved to Philadelphia and worked as a veterinary technician for a year before completing veterinary school at the University of Pennsylvania in 2012. After graduating, Dr. Sarowitz completed a rotating internship at Red Bank Veterinary Hospital in Tinton Falls, NJ. Following her internship, she completed a three-year residency in surgery at Red Bank Veterinary Hospital in 2016. Her surgical interests include surgical oncology, minimally invasive surgery, cardiothoracic surgery, and wound management. She is trained in the tibial plateau leveling osteotomy (TPLO) and lateral extracapsular suture techniques for cranial cruciate ligament disease. Outside of work, she enjoys hiking, traveling, and football.