Spud was rescued in North Carolina by Patti’s son while he was in school. After school, Spud came back to New Jersey where he joined Patti’s family which included another dog, Sinatra. The two dogs bonded and because of their relationship, Spud stayed with Patti when her son moved away. Spud has been a member of the family for the past five and a half years. 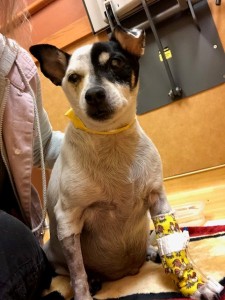 Two years ago, Spud was diagnosed with diabetes mellitus and has been receiving care ever since. Recently, Spud had to come in to NorthStar VETS to be monitored, and his experience was made much better this time with a new device. Spud has a fair amount of fear and anxiety when visiting the veterinarian, and having to get repeatedly poked to measure his blood sugar only made matters worse. This time, Drs. Kimberly Hammer and Stacey Wylie of the Internal Medicine team at NorthStar VETS placed a continuous blood glucose monitoring device on Spud. This new device, once in place, can be read with a hand-held scanner giving the NorthStar VETS doctors the information they need in helping Spud manage his condition, without ever having to draw blood from him. As a result, Spud was much calmer and less stressed during his stay. 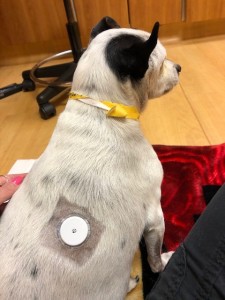 “The team at NorthStar VETS gave Spud a great experience as always and I know he received exceptional care,” said Patti, “He was so sick going in, but everyone was so sweet with him. They made accommodations for him so he was comfortable.” Today, Spud is at home enjoying his normal life. “He still has cataracts from his diabetes mellitus, but he navigates the house and still enjoys going for walks,” added Patti. “I take all three of my dogs to NorthStar VETS. Their staff is top of the line!”

Spud didn’t need to be monitored at home, but if he did, the device could remain in place allowing both the doctors and the pet parents to get the information they need from Spud while he was at home. 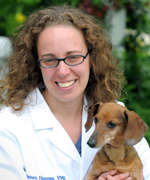 Kimberly Hammer, DVM, DACVIM
Dr. Hammer received her veterinary degree from the University of Pennsylvania School of Veterinary Medicine in 2000. She spent a year at Mississippi State University College of Veterinary Medicine for a small animal internship and returned to the University of Pennsylvania for a two-year residency in small animal internal medicine. She earned board certification from the American College of Veterinary Internal Medicine in 2004. She has a special interest in interventional radiology/endoscopy and minimally invasive procedures. Her other interests include endocrinology, gastroenterology and hematology. She currently serves as the medical adviser for the NorthStar VETS blood bank. She joined the NorthStar VETS team in September 2007.

Outside of work she enjoys hiking, mountain biking, going to music concerts and reading. 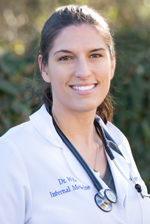 Stacey Wylie, DVM, DACVIM
Dr. Stacey Wylie is a Pennsylvania native who received her undergraduate degree from Millersville University in 2009. She earned her veterinary degree from Michigan State University College of Veterinary Medicine in 2013. After graduation, she completed a small animal rotating internship at Oradell Animal Hospital in Paramus, NJ. She then returned to Michigan State University and completed a 3-year residency in small animal internal medicine in 2017, receiving Resident of the Year in both 2016 and 2017. Dr. Wylie is excited to be part of the NorthStar VETS team. She loves all things medicine, but her special interests include renal, hepatobiliary, gastrointestinal, and respiratory diseases as well as endoscopy and feline medicine.

She currently resides with her husband, their 3 cats (Aeris, Yuffie, and Leon) and adorable pittie mix (Arya). Outside of work, she enjoys spending quality time with her family and friends, playing ice hockey and volleyball, reading, and playing video games. She is also a passionate MSU Spartan and Philadelphia Flyers fan.

This entry was posted in Pets, Veterinary Medicine. Bookmark the permalink.

One Response to Cool Case Spud