My name is Dr. Kimberly Hammer and I am one of the internal medicine specialists at NorthStar VETS.Â  I have been a veterinarian for 10 years.Â  One of the âjob hazardsâ of being a veterinarian is the accumulation of pets.Â  These pets are sometimes unwanted, come in sick off the street with no homes, or come from loving families who have to make a difficult decision due to finances (see Vet-I-Care on how you can help reduce the incidence of this sad situation).Â  Most small animal veterinarians became veterinarians because of their deep love of animals and so it is always difficult to turn away from a pair of sad, pleading eyes when you know they can be saved.Â  The result is a menagerie of âmisfitâ but much loved pets and hopefully an understanding spouse.Â  I thought I would introduce you to my current brood and give you the background on each. The first pet I would like to introduce you to is my dog Maggie.Â  She is a Dalmatian (referred to in my household as the Damnatian â you will see why later on).Â  She is a very sweet 13-year old dog who has been with me since she was 10 months old.Â  Maggie was a shelter dog (a 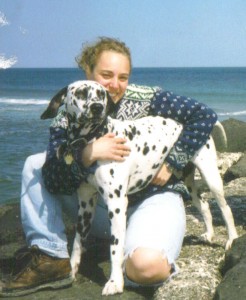 by-product of the 101 Dalmatian craze). Â Â I was a third-year veterinary student and it was time for us to perform our first surgery (a spay).Â  We took in dogs from the local shelter, spayed them, and then returned them to the shelter later in the week hoping they would be more adoptable having already been spayed.Â  Naturally, we were heart-broken to send these pups back to the shelter after having bonded with them for the week and also having gone through a monumental step in our veterinary training with their infinite patience and understanding. Â We found homes for all of the dogs in our group since I was not allowed to have a dog in my apartment.Â  My landlord then decided to make an exception since I was becoming a veterinarian.Â  I promised my friend I would give her âspay dogâ first consideration.Â  Out marches this Dalmatian. Â I took one look at her and said âThere is no way in he** I am owning a Dalmatian!!!!âÂ  Twelve years, 3 sofas, one waterbed, several pairs of shoes, and 2 knee surgeries later (thus the affectionate label Damnatian), I canât imagine life without her.Â  She has been a constant companion and we have seen each other through the best and worst of times.Â  Attached is a picture of us in our younger days in Stone Harbor, NJ.Â  I will say that Dalmatians are hard work â lots of energy â lots of anxiety but she is worth every minute.Â  Now we are nursing her through her twilight years.Â  Luckily, she has maintained her health and except for some arthritis and high blood pressure, she continues to be one of my most beloved pets. 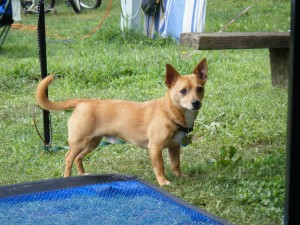 Chico is a young mixed breed dog.Â  We think he is a Chihuahua-Dachshund mix but we arenât really sure â we just like to call him a Chiweenie!Â  He presented to our emergency clinic after having been hit by a car.Â  He had multiple fractures of his pelvis and also a fracture of his humerus (the thigh bone).Â  Surgery to repair the fractures was going to be very expensive and he potentially needed multiple surgeries.Â  The owners could not afford to do the surgery and were going to put Chico to sleep.Â  Meanwhile, Chico was sitting in his cage, sweet as can be despite probably being in pain, and all of us would just melt when we looked at his sad brown eyes.Â  A group of us had gathered that evening and despaired that such a sweet young dog with a treatable problem was going to be put down.Â  We all looked at each other and one of us said âOkay, whoâs going to adopt this poor little creature.âÂ  I said yes.Â  After a very tearful good bye, the owners allowed us to adopt their dog and he had surgery the next day.Â  We took him home a couple of days before Christmas and nursed him back to health through the holidays.Â  I have never been a âsmall-dogâ person but Chico won me over.Â  He manages to tuck his little body into whatever space we happen to be.Â  I do believe Chico loves my husband the most of all but he has integrated himself quite readily into our family!

Alida is a young pit-bull? Boxer? Shar Pei? Who knows what-mix.Â  She came into our lives via fostering.Â  She had been to many homes 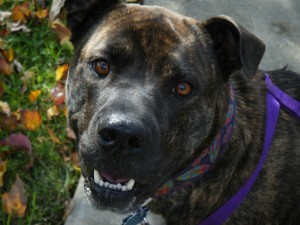 and her last home happened to be with my husbandâs ex-sister-in-law.Â  In addition to working 2 full time jobs and going to school, she did not have time to give Alida the attention she needed.Â  She was young, rambunctious, and needed a big yard to run around.Â  We gladly took her in (I do believe this makes me the best wife ever!) and fostered her for a year.Â  We eventually adopted her and she has become an important part of our family.Â  She is the laid-back voice-of-reason dog who keeps everyone calm.Â  Other than the bad habit of eating the other dogâs poop (gross!), she is a favorite in our household. 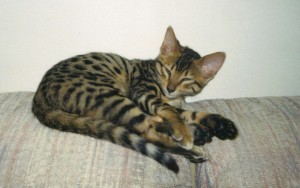 Quinn (named after the Mighty Quinn the Eskimo for those of you who remember that song) is a 10 year old male Bengal cat.Â  I have never been one to own pure-bred cats since there are so many strays that come along and need a home but Quinn came into my household in a very unique way.Â  While doing my internship in Mississippi, I developed a relationship with a client who bred Bengal cats.Â  Bengals are a unique breed in that they are a cross between the common domestic short hair and the wild Asian Leopard cat.Â  The Bengal breed is approximately 10% wild cat and 90% domestic short hair.Â  I had treated one of her previous cats successfully for a nutritional problem so she reached out to me when she was having an unusual high number of kitten deaths due to severe diarrhea and dehydration.Â  When evaluating a problem in a breeding colony of cats, a âherd-healthâ approach is required.Â  Sometimes we have to sacrifice one patient in order to get a diagnosis that will then benefit the rest of the kittens and save their lives.Â  Naturally, this is very difficult because it requires voluntarily euthanizing a kitten and collecting fresh samples for bacterial cultures and biopsies in order to determine the problem and then treat the rest of population.Â  I asked the owner to bring in one of the affected kittens for this purpose.Â  She brought in the cutest, sweetest kitten and my heart just broke.Â  I couldnât possibly euthanize this kitten.Â  I received permission to perform some non-invasive testing including a fecal sample and provide the kitten with supportive care.Â  I was lucky to diagnose her kitten with a bacterial infection called Campylobacter which was easily treated with antibiotics.Â  The kitten survived and the rest of her kittens all lived with simple therapy at home.Â  She was eternally grateful and didnât know how to thank me.Â  I told her that if she ever had a kitten that she was unable to find a home for to think of me.Â  Her cats were much sought after and were often sold (for as much as $900 ten years ago!) before they were even born.Â  She called me several months later and told me she had a beautiful young kitten who she would like to give to me.Â  The only stipulation was that I neuter him as he was not breeding quality.Â  I quickly agreed and now I have a gorgeous cat who is Mr. Personality!Â  He plays in the water, he follows around the house, he plays with all the dogs (he has been found to be wrestling with the 70lb pit-bull mix Alida with his arms wrapped around her neck and his mouth at her jugular!!).Â  He has moved all over the country with me and is the most wonderful cat ever (I am slightly biased).

Gummy is a male middle-aged all black cat who we adopted from the shelter.Â  I got Gummy from the shelter I was volunteering at.Â  My boyfriend, now husband, had recently lost his cat (who was all black and named Pucky since he is an avid Flyers fan) and was looking for another all black cat to replace him.Â  Along came Gummy.Â  He was a shy but sweet cat who I worked with at the clinic. He would just sit in my arms and not move at all.Â  I thought this was friendliness but it turns out he was just frozen with fear.Â  I later found out that Gummy lived in a feral cat colony until he was about 8 months old and had minimal handling and interaction with humans.Â  With some patience and love, he now solicits us for attention and meows when no one is paying attention to him.Â  Unfortunately, he is too scared to leave our basement so we have set up a âkitty castleâ for him down there.Â  He always has the warmest spot in the house (next to the furnace) and though shy, is very sweet.Â  As far as his name is concerned, his official name is âBleeding Gums Murphyâ since when we first adopted him, he had severe gingivitis which resulted in bleeding.Â  Are there any Simpsons fans who know the âBleeding Gums Murphyâ reference?

Sadie is a 10-year old African Gray parrot.Â  I adopted her when she 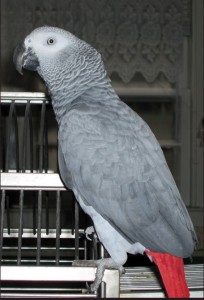 was four.Â  I had recently lost my Yellow-Naped Amazon, Charlie, to an unknown neurologic disease.Â  Sadie belonged to one of my colleagues who I worked with in Mississippi who loved her but couldnât provide her with all of the attention she needed.Â  Sadie joined the brood in 2002 and has happily ruled the roost ever since.Â  Some people may worry about how Sadie defends herself amongst the carnivorous cats and dogs of the household.Â  I can guarantee you that after a good nip from Sadie, they give her a wide berth!