The Heart of a Soldier

Hi world, its been a short while but its your hostess, Nicole:

Working here is almost like agreeing to have your heart strings tugged on pretty often, but recently a story came about, so touching that I feel the need to share it with the world.

This story comes from an ongoing war that is often forgotten by us here in the United States. Â As we go about our daily routines there are families with loved ones who are fighting on our behalf. Â They fight for us so we can be free, so we don’t have to worry. Â That’s why I feel it is important to mention their constant dedication to us and to our country.

Truthfully, Â I am lucky that I get to see those that are near and dear to me on a pretty regular basis and I never considered that to be such a luxury until I realized that so many families, are missing a son, daughter, father, mother, Â husband, wife, brother, sister, girlfriend, boyfriend, fiance etc…This tale is about the human-animal bond and what true companionship is.

“I had a puppy that I decided to save here named Sultan. Â He was so loving and sad, that I knew right away he wasn’t going to make a good working dog at our forward patrol base and didn’t have a future here.” 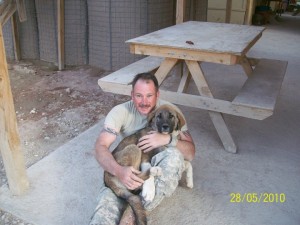 With the help of an animal rescue group Sultan made it safely to the United States to Brian’s wife, Bonnie.Â Â Though, Sultan had been cleared by the vet in Afghanistan, Bonnie took him to her family veterinarian to find that he had liver problems. Sultan was then referred to NorthStar VETS for an ultrasound where he met staff surgeon Dr. Garrett Levin, and internist Dr. Kimberly Hammer.Â Â Here he received the diagnosis of a Left Division Congenital Portosystemic Shunt, Intrahepatic PSS, and his liver was too small for his size.

Bonnie, recognized the strong human-animal bond between Sultan and her husband and elected to proceed with the surgery. The procedure was costly and with funds running low from spending the majority on getting Sultan to America, Bonnie turned to the hospital’s foundation Vet-I-Care.Â Â Vet-I-Care approved her application and quickly organized a fundraiser to cover Sultan’s medical expenses.

Since then Sultan had his surgery and is one-week post operation.Â Â In just seven days he went from being dazed and confused at 74 lbs to being a playful pup weighing in at 107 lbs. The average weight of an Anatolian Shepherd is 150 lbs, and they are native to Afghanistan.

Sultan is currently resting healthfully at home waiting for his best friend to return home. Assanowicz may have saved Sultan by sending him to America but Sultan saved the soldiers by providing them with true companionship.

NorthStar VETS hospital foundation, Vet-I-Care must raise the money for Sultanâs procedure and has set a goal of $8000. The fundraiser appropriately titled âThe Heart of a Soldier,â will be held on Friday, February 25th at Tommyâs Inn, 520 Monmouth Rd, Millstone, NJ starting at 7pm.Â  Tickets are available for $30 per person and include a full-buffet, non-alcoholic beverages and entertainment like karaoke.Â  A 50/50 and a Silent Auction with gifts like sports memorabilia, will also take place. Contact Eileen Schuck at eschuck@vet-i-care.org to purchase tickets.