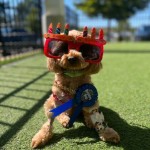 When Chewy began having trouble with his back legs, his parents took him to his regular veterinarian. As his situation continued getting worse, he was referred to our Neurology team in Robbinsville. Shortly after arrival, an MRI revealed that Chewy had a herniated disc in his lower back. The disc material was compressing the spinal cord, creating tremendous discomfort and affecting his ability to walk. Chewy’s medical team performed a surgery called a hemilaminectomy, during which the herniated disc material was removed and the compression to his spinal cord relieved. Surgery went well, and little Chewy was able to go home feeling much better, but not before celebrating his birthday with our team during his stay!