When it’s your own pet 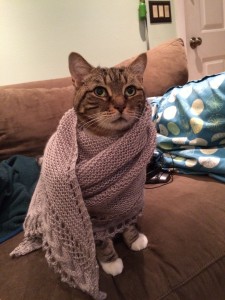 On January 1st of this year, I lost my beautiful boy, Rocco, initially presented as a euthanasia patient during my internship (first year as a veterinarian). He was the dumpster diver tomcat at an Italian restaurant in Brooklyn, according to legend. He would have been the 10th euthanasia that night, and none of us had the heart, it had already been a tough night for us young doctors. Instead of euthanizing, he was saved to become a blood donor because he was so sweet. After failing to be a blood donor due to health reasons, he became mine. Rocco did hit double digits with me, we had 11 great years together. He was so special to me because I converted him from a feral cat to the ultimate lap cat. If he could live with his arms around my neck, I think he would have.

It has taken me this long to be able to write this without crying. Anyone here can tell you, that in those moments when my cat was sick, that I was no longer a veterinarian, but a scared cat mom. You would think, as a veterinarian, we would be better prepared to emotionally handle a sick pet, but really we go through the same emotions as anyone else. As an Oncologist, I negotiate end-of-life care all too often. And truly, I feel, that losing Rocco has made me a better doctor for my clients and patients. I can empathize better with my clients, after just having gone through the process myself.

I often tell my clients, that I want pictures of my patients, because I like knowing what their lives are like outside of the room in which I treat them. I want the stories to help them understand their relationship with their beloved pet. Rocco was a pro at stealing food. If anyone ate slowly or wasnât paying attention, he would watch closely, run and whack his paw on their fork in such a way that he knew the trajectory to get his prize of food. Since he lived in the dumpster of an Italian restaurant, he loved red sauce, cheese and pasta. So in homage to my old man, after he died, I made his favorite food, lasagna, for all those that helped me say goodbye.

For some of us, saying goodbye becomes tough enough to impact our ability to move forward. If you are in that position, consider getting involved with the Bereavement service here at NorthStar VETS. 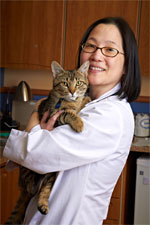 Jennifer Kim, DVM, DACVIM (Oncology)
Dr. Kim grew up in New York and received her BA from the University of Pennsylvania in 1998. After spending two years at the National Cancer Institute performing cancer genetic research, she attended veterinary school at Tufts University, graduating in 2003. Dr. Kim completed a rotating internship at the Animal Medical Center in Manhattan, New York and then an oncology internship at Cornell University. She initially began at NorthStar VETS as an emergency clinician in 2005 and returned in January 2010 to treat oncology patients after completing a residency in medical oncology at Michigan State University.