What is Rabbit Hemorrhagic Disease?

Rabbit Hemorrhagic Disease Virus (RHDV) is a serious viral disease that may cause a high rate of infection and death in rabbits. It does not cause disease in humans or animals other than rabbits. It is caused by a Calicivirus, which can survive for weeks in the environment, and can be spread over short distances on objects such as articles of clothing, and therefore can be spread easily and rapidly.

Why is it Significant that RHDV2 has Been Found in New Jersey?

As of 03/19/2020, USDA has identified an isolated event of 13 confirmed cases of RHDV2 that can be linked to a veterinary hospital in New York City. All cases were from New York and there are no confirmed cases at this time in New Jersey.

There are several types of RHDV viruses. RHDV outbreaks, with original strains of the virus (not RHDV2), have been reported in pet rabbits in the US in 2000 (Iowa), 2001 (Utah, Illinois, New York), 2005 (Indiana), 2008 (Maryland) and 2010 (Minnesota). In these cases, only a single household or facility was involved, with no further spread. These short-lived, small outbreaks were controlled by isolation and cleaning. There was a single, isolated reported case of RHDV2 in Ohio back in September 2018 and there were no other cases seen in that area. That case was the only report until the reported cases recently in New York, which has also believed to be an isolated event. The virus reported recently in NYC is the newer strain, RHDV2. This new strain is able to infect a wider variety of rabbit species, to include wild rabbits such as cottontails and jackrabbits. The NY and NJ Department of Agriculture is working with state and federal agencies to conduct careful surveillance of wild rabbits in the area surrounding the confirmed case of RHDV2.

What Are the Symptoms of RHDV2?
Affected rabbits may die suddenly without symptoms or may have a fever or show neurologic signs such as incoordination, excessive excitement, convulsions, paddling, or paralysis prior to death. Most will appear to have difficulty breathing just before death and may have a bloody discharge from the nose. There also may be observable hemorrhages in the eye, blood in feces, and icteric skin coloration. Death usually occurs within 1 to 3 days. A few may have milder signs and survive, developing antibodies, but this is rare. There is a chronic form where jaundice, weight loss and lethargy give way to death after a few weeks. Rabbits can become infected with RHDV at any age, but young rabbits (less than 40-to-50 days old) experience only subclinical disease. However, the death rate is very high – between 40-100%. In recent Canadian outbreaks of RHDV2, the death rate was close to 90%. Infection with RHDV also causes lesions throughout internal organs and tissues, particularly on the liver, lungs and heart, resulting in the characteristic hemorrhaging and fatally rapid progression of the disease. Signs of RHD may be similar to septicemic pasteurellosis, severe septicemia from other causes presenting with secondary disseminated intravascular coagulation, poisoning, and heat exhaustion.

How Long Does it Take for a Rabbit Exposed to the Virus to Become Ill?
The time from virus exposure to symptoms (incubation period) is very short, within 16 to 48 hours. Fatalities are usually occurring within 2-9 days after infection. The infectious period may last up to one month.

How is the Virus Spread?
Infected rabbits pass on the virus through any body fluid, including urine, feces, or fluid from the eyes nose or mouth. The virus survives outside of the body, so can be found on rabbit fur, bedding or anything the infected rabbit touches. The virus can live for weeks in wet organic material such as dirty bedding. It can be passed over short distances on clothing, shoes or hands. It can also be spread by flies and mosquitos. It is resistant to freezing and heat. Surviving rabbits are immune but can continue to pass virus for 42 days or more.

How is the Virus Treated?
There is no cure for RHDV. Rabbits that are not severely infected may be more likely to survive with supportive care such as fluids and assisted feeding.

Can my Rabbit be Vaccinated to Prevent This Disease?
Vaccines are available in places where the disease is widespread, such as Europe. After several outbreaks of RHDV2 occurred in British Columbia on the west coast of Canada from February to April 2018, the Canadian government issued emergency, provisional license to use this vaccine in specified affected areas only. There is no vaccine approved for use in the U.S.

How Can I Protect My Rabbit?
At this time, the virus has not been reported outside of the original isolated events. Since the virus can be carried on shoes, clothing, or hands, it is important to pay particular attention when coming home to your rabbit after you have visited locations where other rabbits have been. This would include pet stores, feed stores, shows, shelters, etc.

To Protect Your Rabbit:

How Can I Protect Other Rabbits?

Learn more about the Avian and Exotics service at NorthStar VETS. 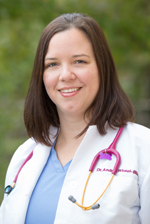 Andrea Winkel-Blair, DVM, MPH
Dr. Winkel-Blair graduated from Michigan State University CVM in 2009 and completed her Masters in Public Health from the University of Minnesota in 2010. She went on to join the U.S. Army Veterinary Corps in 2009 where she was an active duty captain. After 4.5 years, she decided it was time for a change and left the Army for private practice. Dr. Blair was in private practice for about 1 year before she decided to go back for a residency in Avian medicine. She completed her Avian medicine and Surgery residency at Texas A&M University where she worked on all sorts of exotics, from big cats to hummingbirds. She spent a year at an avian & exotics exclusive specialty service in Columbus, OH before joining the staff at NorthStar VETS in Robbinsville, NJ.