From the Client Perspective: I Feared Losing My Best Friend

I have a natural love for dogs, all animals, and life in general, but I especially know the heartbreak of losing a beloved dog. They are simply not with us long enough, and the last dog I lost was my Black Lab, Onyx. At the age of ten, Onyx suddenly became sick one Wednesday night and by Saturday morning he was gone. I feel like I never quite got closure and still carry his loss with me.

Onyx sired one litter in his lifetime resulting in nine beautiful puppies. One of those dogs was Chockie, who I gave to my son. At the time, my son moved around a lot and Chockie visited me on different weekends. One particular weekend, while my son was stopping by to drop Chockie off, he said, “Dad, I know how much Onyx meant to you, and what you went through with him. Why don’t you keep Chockie?” Chockie was five months old at the time and we’ve been inseparable ever since. 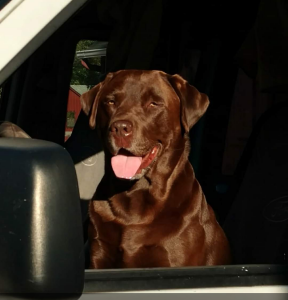 I was living alone with my two cats, but Chockie became my boy. We came to love each other deeply and do everything together. He sleeps in my bed when I’m not home. He rides in the car with me. We even live off our own organic diets. He is wonderful and we understand each other completely.

He turned ten recently, and is getting older. On our rides, I help him in and out of the car. He sees his family veterinarian twice a year, and on a recent visit, we received some bad news. Normal liver enzyme levels for a dog should be between five and one-hundred-thirty. Chockie’s enzyme levels were at three-thousand! We were referred to Dr. Karah Burns of the NorthStar VETS Internal Medicine team for further treatment. I was shocked, devastated, and frankly scared. 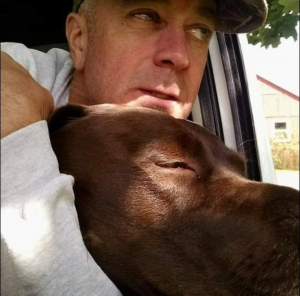 We got the first available appointment because there was no question I would do everything possible to save his life. It was hard sending him into the hospital without me, but I trusted the team at NorthStar VETS. Dr. Burns used an ultrasound machine to find a tumor on his liver. Suspecting a type of cancer called hepatocellular carcinoma, she recommended I see a veterinary surgeon to have it removed, and I wanted to see a surgeon that afternoon! I was able to speak with the surgery team who said the first step was getting a CT scan. I was told that hepatocellular carcinomas originate from liver cells (hepatocytes) and have a low rate of spread to other organs. The doctor recommended staging, which would use blood work and the CT scan of the chest and abdomen to look for other life-threatening problems in the body that could be associated with the mass. Finally, I was told that surgically removing the tumor is the best option and statistically has favorable results. This is because untreated liver tumors result in a much higher rate of death resulting from the tumor than dogs who get them removed. These tumors can rupture and bleed into the abdomen or compress the main bile duct that drains bile from the liver into the intestines, causing jaundice. It could also compress other internal organs or blood vessels. I knew what needed to be done, and we left the hospital confident in our plan. That night, he seemed painful, so I called the surgeon, who let my family veterinarian know they could prescribe some pain medication. A few days later, we were back for the CT and surgery.

Dr. Jackie Williams, the Radiologist, confirmed a softball-sized tumor on Chockie’s liver and he was off to the operating room. Dr. Gregory Zuendt of the surgery team successfully removed a liver lobe and the tumor. Two days later, Chockie came back home with me. 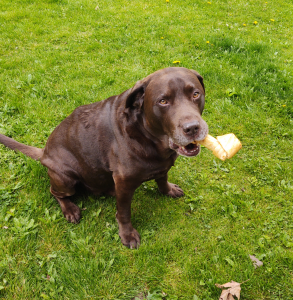 At a follow-up appointment with my family veterinarian after the surgery, Chockie’s liver enzyme level decreased to 200! Last week’s follow up had the number just two points above normal. Now, we don’t have to go back to follow up for another six months. The team at NorthStar VETS obtained clean margins and my boy is cancer-free at this point!

Life is pretty much back to normal now. I’m considering a career change that will allow me to help more pets. Chockie and I are still inseparable and I can’t thank the doctors and nurses at NorthStar VETS enough for saving my dog’s life.

Learn more about the Internal Medicine service at NorthStar VETS 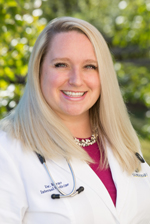 Dr. Karah Burns DeMarle was born and raised in Rochester, New York. She completed her undergraduate studies in New York, receiving both an associate’s degree in veterinary science technology from SUNY Canton and a bachelor’s degree in animal science from Cornell University. From there, she moved to Ohio to complete her veterinary degree at The Ohio State University. Upon graduation in 2016, she moved to Massachusetts to complete a one-year rotating internship followed by a 3-year small animal internal medicine residency at the Cummings School of Veterinary Medicine at Tufts University. Although she enjoys all aspects of internal medicine, she has a special interest in diseases that affect the liver and gallbladder of cats and dogs. 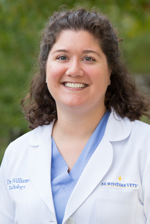 A native of Virginia,Dr. Williams initially began a career as an engineer after completing undergraduate and graduate degrees at the University of Virginia. She earned her veterinary degree from the Virginia-Maryland Regional College of Veterinary Medicine at Virginia Tech. Dr. Williams then completed a small animal rotating internship at Affiliated Veterinary Specialists in Florida and a diagnostic imaging residency at Iowa State University. Following an academic career as a clinical assistant professor of diagnostic imaging at The Ohio State University and University of Wisconsin-Madison, Dr. Williams joined NorthStar VETS in 2016. Her clinical interests include ultrasonography of the feline biliary tract and pancreas, CT of avian coelomic diseases, and dental radiography. 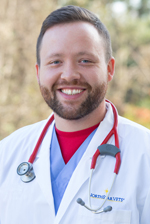 Dr. Zuendt graduated veterinary school from the University of Illinois in 2015. He went on to complete a small animal rotating medicine and surgery internship at Oradell Animal Hospital. Following this, he completed a surgery-specific internship in Nashville at BluePearl Veterinary Partners. Dr. Zuendt then joined NorthStar Vets in July 2017 and has a special interest in surgery, critical care medicine, neurology, and cardiology.