After vomiting blood and collapsing at home last August, Mackers was brought to his family veterinarian where they found an abdominal mass and started treatments. Within days, he collapsed again came immediately to the emergency room.

Dr. Joanna Lloyd of the NorthStar VETS Emergency and Critical Care team performed two transfusions and other stabilizing treatments before admitting him to the hospital. Tests revealed Mackers had a large cell lymphoma, and he was referred to the Oncology service. Two days later, Dr. Lisa Barber of the Oncology service began treating Mackersâ stomach lymphoma.

By late September, our team reported that Mackersâ tumor was undetectable and his blood counts were normal. By late October, he was in complete remission. He now has four months of treatment complete and two to go. By addressing the issue quickly, directly, and with the right goals in mind, Mackers enjoys a much-improved quality of life today!

Lymphoma in Cats
Lymphoma is a cancer of white blood cells, specifically lymphocytes. Lymphocytes are found throughout the body and function as part of the immune system, but the most common site of lymphoma in cats is the gastrointestinal tract. It often spreads to lymph nodes within the abdomen, spleen, liver and bone marrow. Even when it is seen in a single location, lymphoma is considered a systemic disease because lymphocytes travel throughout the body. Chemotherapy can be helpful in managing feline lymphoma.

How Lymphoma is Treated in Cats
Many people become anxious at the mention of chemotherapy due to concern over potential side effects, however, the goal for chemotherapy in pets is to improve quality of life. This means the treatments are different from whatâs performed in human patients. Chemotherapy kills cells that are actively growing and dividing. Rapid growth is one of the features of lymphoma, which is a reason why the disease is responsive to chemotherapy.
The most common symptom of chemotherapy seen at home is gastrointestinal upset, including decreased appetite, nausea, vomiting or diarrhea. Fortunately, gastrointestinal upset can either be prevented or easily managed with oral medications. Another common side effect of chemotherapy is a low white blood cell count. White blood cells are the first line of defense against infection. If the white blood cells, specifically the neutrophils, dip excessively low, cats are at increased risk of infections. The infections usually arise from bacteria normally present in the catâs body (such as the intestines) and can be life-threatening. To help minimize the risk of this complication, the patientâs blood is checked regularly to make sure the numbers donât go too low. Antibiotics are used as a precautionary measure if needed as well as changing future doses of chemotherapy.

Learn more about the Emergency and Oncology services at NorthStar VETS. 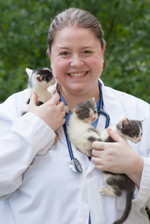 Dr. Lloyd grew up in Philadelphia before going to Williams College in Massachusetts where she majored in Chemistry with a specialization in Biochemistry and Molecular Biology. After college and a brief stint as an ER veterinary technician, Dr. Lloyd earned her veterinary degree from the University of Pennsylvania. She joined NorthStar VETS in April 2018. 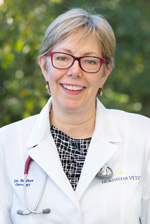 Originally a native of New York City, Dr. Barber received her DVM degree from The Ohio State University College of Veterinary Medicine in 1992. She went on to pursue a rotating internship in small animal medicine and surgery followed by a residency in medical oncology at the University of Pennsylvania. She then served as a staff oncologist at Penn until 2001. Dr. Barber joined the faculty of Cummings School of Veterinary Medicine at Tufts University in 2002 and became section head of oncology in 2003. During her 18 years at Tufts, she treated a variety of different types of animals for cancer, conducted clinical trials of new therapies, published many scientific articles, and trained veterinary students and residents. She is a recipient of the Artemis Award for Clinical Excellence and the Zoetis Award for Veterinary Research Excellence. She remains an adjunct professor at Tufts. Dr. Barber joined NorthStar VETS in 2020. Her interests are both innovative therapies for the treatment of cancer in companion animals and palliative care, but her primary focus is preserving and enhancing quality of life in pets with cancer.