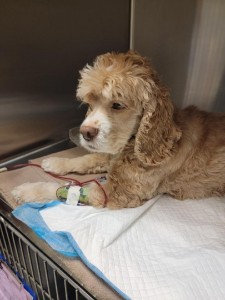 Colby, a Cocker Spaniel, came to the NorthStar VETS Emergency service for evaluation of lethargy and appetite. He was diagnosed with Immune Mediated Hemolytic Anemia (IMHA) which is an autoimmune disease where the body attacks and destroys its own red blood cells. This results in a life-threatening anemia with a high risk of pulmonary thrombo-embolism. Often, this necessitates life-saving blood transfusions. The treatment for this disease suppresses the immune system and blood transfusions are given to treat the anemia. Packed cell volume (PCV) is an indicator of the amount of red blood cells in a dog or cat. A normal dog typically has a PCV of 40-50%. Emergency transfusions are typically needed below 20%. Cocker Spaniels have a breed predisposition for this serious disease. 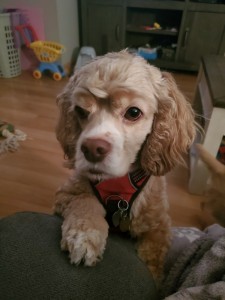 At initial presentation, Colby was noted to be severely anemic necessitating a lifesaving blood transfusion. Orson, a greyhound and blood donor, saved Colbyâs life. The case was transferred to the Internal Medicine department where Colby received multiple blood transfusions and spent days in the ICU recovering under the care of the nursing staff. During the course of his hospitalization, his PCV fluctuated between 24% and 12% when Athena, another greyhound, donated as well. When his PCV rose a little more and he was stable, Colby went home and did great between rechecks. His family made sure he got his medication on time and rechecked his bloodwork as recommended. A month later, his PCV was 45% and he is eating, drinking and getting back to his old self at home! 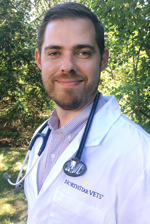 Adam Miller, DVM, DACVIM
Dr. Adam J. Miller is a native of Buffalo, New York and received his veterinary degree from St. George’s University having completed clinical rotations at Cornell University in 2015. He completed an intensive Small Animal Rotating Internship in Medicine and Surgery with VCA in Norwalk, Connecticut before returning to Cornell University for a three-year residency in Internal Medicine. Dr. Miller’s professional interests include nephrology, gastroenterology, and immune-mediated disease.

Outside of work, you will find him trying new restaurants, watching football (Go Bills!) or documentaries, or enjoying the outdoors with his affectionate Newfoundland, Isabelle.