Curiosity didnât only kill the cat. A pooch gets more than he bargained for when his curiosity got him kicked in the head by a 1200 lbs. horse.

It was Christmas Day, and a couple was travelling to visit family over 2 hours away from home.Â  Their dog is so trustworthy; he doesnât even need a leash and always comes when called. Â Â This particular poochâs name was Duncan. Duncan is 10 Â½ years old and became quite curious on this particular day when he heard the horses in their pen.

Duncan wandered over to the pen to see what all of the commotion was about to find this large âdog.â When Duncanâs dad, Bryan realized he was missing he called for him and when he didnât come he knew something was up. Hearing Duncan barking Bryan and his father dropped the Christmas gifts and hurried to find out what was going on.Â  There he was darting under the fence and into an empty pasture running along the fence barking.

Shocked that Duncan was not listening Bryan hopped one fence and by the time he cleared it Duncan was under another fence with two horses.Â  A small pony and a GIANT black warm blood at about 1200 lbs.Â  Of course, Duncan was only interested in the warm blood, taunting it with his barks and chasing him lap after lap. Eventually the horse bored of this game and kicked out a hoof that made direct contact with Duncanâs head.

Duncan took one step and crumbled to the ground.Â  Bryan hoped he was only startled by the accident and rushed to get him out of the pen before examining his injuries.Â  Once he was secure out of the gate Bryan could see the damage that was caused.Â  Duncanâs face was completely opened up and you could see clear to the skull. 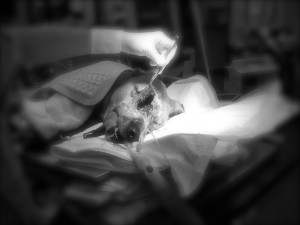 Scrambling to find a 24 hour emergency vet that was open Bryanâs father returned with the name and address of NorthStar VETS.Â  Upon arrival Duncan met Dr. Reid Groman; Emergency and Critical Care and Internal Medicine Specialist.Â  His diagnosis: âWhile is looks bad, itâs not as bad as it looks.â

Duncan went to the emergency room for further diagnostics.Â  He had a seizure on the table and his fate seemed bleak.Â  Minutes later while waiting for the CT machine to warm up one of NorthStarâs technicians monitored his vitals, which helped, saved his life.

Finally, after the CT scan Duncan showed no signs of neurological damage and Bryanâs owners felt a glimmer of hope.Â  Dr. Joshua Portner assisted with caring for Duncan and Dr. Joy Weinstein would perform his surgery.Â  Three NorthStar VETS doctors worked together and played an integral role in Duncanâs recovery. 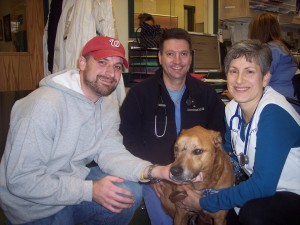 Dr. Weinstein was the surgeon on call that day and after hearing the description of Duncanâs injuries expected to drive back to the hospital to find out there was nothing that could be done.Â  After she reviewed the CT images with Dr. Groman, she recommended going to surgery since he was already anesthetized. She expected that Duncan would not make it till morning since his brain was exposed but that didnât stop her from trying. Dr. Weinsteinâs wise protocol and judgment allowed her to be greeted by Duncan the next morning.Â  She was thrilled to see Duncan awake and alert. Every doctor and technician that worked on Duncan considers him to be a true âChristmas Miracle.â

Today, it has been 4 weeks since Duncanâs accident, most of his stitches are out, his drain has been removed and he is begrudgingly staying calm and off the furniture.Â  The entire team at NorthStar VETS is pleased with Duncanâs recovery. 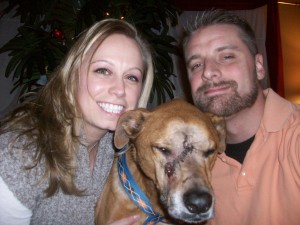 Duncan happy at home with his wonderful family.

Keep up with our blogs for more tales from the 24 HR ER VETS, 24 Hour Emergency Vets!