Chelsea Bogart, DVM is a doctor in the Emergency and Critical Care service at NorthStar VETS. In this video, she talks about how she got into veterinary medicine, the types of cases she sees, and the kind of pets she has at home.

How Animals Brought Dr. Bogart into Veterinary Medicine
We caught up with Dr. Bogart, who was checking on a patient. Dr. Bogart works with Emergency cases and grew up with a lot of pets around that inspired her to become a veterinarian. “I went to undergrad at UMass Amherst in western Massachusetts, and then I went all the way to California for veterinary school. I went to Western University of Health Sciences and that’s where I earned my doctorate. After that, I was living in Austin, Texas with my husband, who is a college professor. He got a job at Rowan University, which led us out here. I have a classmate who works at NorthStar VETS, and that’s how I found NorthStar VETS.” She went on to talk about the rescue pets she has at home. “Both of my dogs are L.A. street dogs I found when I was in veterinary school. I have one that’s an Australian Shepherd mix, and one that’s a Chihuahua/Dachshund, so he’s extra sassy. I also have two senior cats that I’ve had since I was a teenager.”

The Types of Cases Dr. Bogart Sees
Dr. Bogart works in Emergency and Critical Care, and sees a wide variety of cases each week. “We see a lot of trauma cases, we see a lot of vomiting and diarrhea, gastroenteritis, and things like that. We see puppies with dietary indiscretion getting into things they shouldn’t. Those are probably the most common things we see coming through Emergency every day. Pets do really well with supportive care. I think it’s really rewarding to see a pet that came in sick and by the end of the shift have it be bouncing back and showing significant improvement.”

Many pets come into the Emergency department in dire situations, and Dr. Bogart enjoys seeing the dramatic improvements in her patients. “I saw a Chihuahua puppy, and I’m a Chihuahua Mom, so they’re already my number one. It came in having had a lot of vomiting and diarrhea, it was very dehydrated. Actually, on presentation, was close to passing away, but we intervened very quickly. We started fluids, antibiotics, and pain medication. In the next eight hours when I left at the end of my shift, he was bouncing around and giving kisses. It was really sweet and rewarding to see him make that improvement.”

What Dr. Bogart Loves about NorthStar VETS
Dr. Bogart has only been at NorthStar VETS for a few months, and she looks forward to helping more pets and their families in the future. “I think it’s a really wonderful environment in which to work, which is one of the most important things. Plus, I think the quality of medicine is really high which is excellent!”

Learn more about the Emegency and Critical Care service at NorthStar VETS. 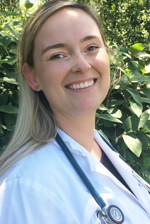 Dr. Bogart grew up in Deerfield, Massachusetts and earned her Bachelor of Science degree in Animal Science from the University of Massachusetts in 2012. Following graduation, she moved to California where she earned her Doctorate of Veterinary Medicine from Western University of Health Sciences. She completed a rotating internship in San Diego, CA and then moved to Austin Texas, where she worked full time as an emergency veterinarian.

Dr. Bogart recently relocated from Texas to New Jersey and joined the emergency team at NorthStar VETS. Her clinical interests include toxicology, neurology, and wound management. In her free time she enjoys hiking, cooking, watching sports, and spending time with her husband as well as their two rescue dogs and two senior cats.