Jaws is a cat who was discovered under the car of a caring woman named Melissa. Melissa’s mom went to put the garbage out, heard a terrible yowling and realized that there was a cat under their car. She called Melissa down, and they spent about twenty to thirty minutes trying to get this cat out. They realized that he was seriously hurt when they got him out. Melissa recalls, “He looked rabid to me, and I didn’t want to touch him, but my mom managed to grab a towel and we got him into a case, and she was really insistent that we bring him over to our vet, who is Dr. Rockhill over at Belle Mead Animal Hospital. And she took it from there. He’s a really sweet cat and we did what we could for him to make sure he was stabilized until we could get him the help that he needed.”

Dr. Rockhill, a veterinarian at Belle Mead Animal Hospital, was the doctor who took on Jaws’ case. She said, “I opened up the carrier and he sort of, popped his head out, and was purring away. He had all this discharge from his nose and initially his jaw was lopsided. He had a couple fractures, and the discharge from his nose was from the trauma. He was still the friendliest cat I had ever seen. We didn’t have to sedate him for the exam, he let us draw blood, and when we tested it, everything looked perfect. Then we took X-rays.” At this point, they had to think about their next step. Dr. Rockhill continued, “We weren’t sure what we had to do. He didn’t have a microchip, he was a neutered male and pure-bred, and we weren’t sure if he had an owner. We called over to a local shelter, but nobody was looking for him. We still weren’t sure if we would be able to take over his care or if somebody else had to take care of him. But the shelter said based on how much pain he was in, they were probably going to euthanize him because they weren’t equipped to take care of what it would take to fix him.” Dr. Rockhill had to think fast to save this cat. “I started a Go Fund Me for him, because we knew it was going to be a costly matter for him to get fixed up based on the work he had to get. From there, everybody, through Facebook and word-of-mouth, donated money just to help out with his cause. We kept him in our care, got him on fluids, got him stabilized and then Melissa brought him to NorthStar VETS.”

Dr. John Lewis, Veterinary Dentist and Oral Surgeon at NorthStar VETS, was brought in to help repair the worst of Jaws’ problems. Dr. Lewis said, “The first time I met Jaws, I put my stethoscope to his heart to take a listen, and he was purring despite having so much severe trauma to his entire facial region. His jaw was split down the middle of the two lower jaws, and the left-lower canine tooth was poking into the soft tissue of the roof of the mouth and causing severe trauma. He had what looked like multiple maxillary fractures as well. We unfortunately see that degree of trauma not on a weekly basis, but we do see it on a monthly basis. The good Samaritans who found him proceeded because once they learned that it wouldn’t be inhumane to go ahead and proceed with trying to repair his maxillo-facial trauma, they were all in.”

Melissa commented on Jaws quality of life today by saying, “I never thought with the type of trauma that he had, that he would look so great and that Dr. Lewis would be able to get him to look like this. This is amazing! Jaws is so sweet and good-natured. He is really a ham and gets along with everyone.”

Dr. Lewis summed up the story like this, “The community just gathered around and through the Go Fund Me page that Dr. Rockhill set up, and through the Vet-i-Care charitable foundation, there was a lot of support to allow him to get all of his trauma dealt with. And now he’s a new cat!”

This is a great story about how one person stepped up to help an animal in need, and two caring veterinarians stood with her and got the community involved to save this cat’s life and give him a second chance. 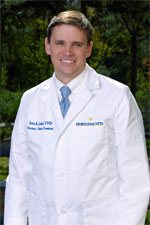 John Lewis, VMD, FAVD, DAVDC
Dr. Lewis graduated from University of Pennsylvania School of Veterinary Medicine in 1997 and spent five years in general practice prior to returning for a residency in dentistry and oral surgery. He became a Fellow of the Academy of Veterinary Dentistry (AVD) in 2004 and a Diplomate of the American Veterinary Dental College (AVDC) in 2005.

At the University of Pennsylvania, Dr. Lewis has served as assistant professor of Dentistry and Oral Surgery, associate director of the Mari Lowe Center for Comparative Oncology, and more recently, as Chief of Surgery. His research interests include oral surgical oncology, maxillofacial fracture repair, maxillofacial reconstruction, new therapies for treatment of feline oral squamous cell carcinoma, and lasers in oral surgery and dentistry.

Dr. Lewis is a past president of the American Veterinary Dental Society, and has served as examination chair of the AVDC and credentials chair of the AVD. Prior to joining NorthStar VETS full time in October 2013, Dr. Lewis was the residency director of the world’s first academic residency in veterinary dentistry and oral surgery at The University of Pennsylvania.

Dr. Lewis received the AVDC Outstanding Candidate award in 2004, the Hills AVDS Education and Research Award in 2012 and the AVD Fellow of the Year award in 2013.

Dr. Lewis is the proud father of five boys, two dogs, and two cats, all of whom keep him busy outside of work.