Gabriel is the Luckiest Dog

We recently met a patient named Gabriel owned by three amazing triplets. His story is incredible and this may be the luckiest dog we’ve ever met. This is his story. 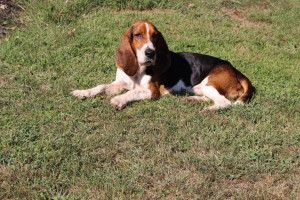 “Gabriel is actually a southern boy.” The triplets begin recounting the tale. “He came up on a transport because he wouldn’t hunt down south and he ended up at the Somerset Regional Animal Shelter right down the street from our house. He stayed there a couple of weeks until a family adopted him on a trial. It was on their first day that a teenage girl was walking him when something spooked him and he bolted. That was the beginning of his saga. He was lost on his own, dragging the leash, crossing major highways here in New Jersey for forty-two days!”

Despite an extensive search, Gabriel traveled over seven miles across Somerset County enduring ticks, dehydration, an elbow injury, and losing twenty-five pounds in the process before he was luckily found.

“One day, a gentleman in Martinsville found him in his chicken coop. They called the shelter and the shelter immediately went and got him. His original family felt that he was a little too much for them to handle, so they brought him back to the shelter. He needed elbow surgery on account of maybe being nudged by a car.”

The three sisters took Gabriel to a local veterinary hospital to have the elbow injury operated on. But after finding additional heart problems, the triplets turned to the specialists at NorthStar VETS. 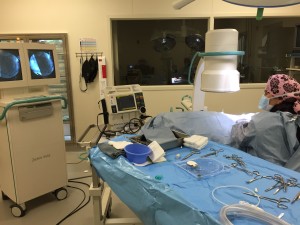 Jennifer Schneiderman, DVM, DACVIM (Cardiology), explained, “Gabriel is a Basset Hound that was diagnosed with an arrhythmia called third degree A-V block. Basically, that causes the heart to beat too slow which can make animals feel weak, lethargic, and they can even have passing-out episodes. The only way to fix that kind of arrhythmia is by placing a pacemaker which allows the heart to beat at a faster rate that’s more compatible with everyday activity and life.” She continued, “The way we place pacemakers now in veterinary medicine is minimally invasive. Using fluoroscopy, we can go down the jugular vein and place the lead wire of the pacemaker into the right ventricle. It’s then attached to a battery pack that sits in a pocket under the skin on the neck. This way, we don’t need to open up the chest and dogs go home the next day feeling great!”

“He is so happy!” Reported the triplets, “He wakes up wagging his tail, he rests soundly, and he’s got a great appetite. He is a delight! And he loves the way when he arrives at NorthStar VETS everyone says, ‘Gabriel’s here!’ He feels like he is a VIP patient here.”

“Dr. Schneiderman noted, “Doing these procedures is very gratifying because it is such a wonderful feeling to be able to instantly help an animal feel better. Really, as soon as they wake up from the surgery they feel great and they’re ready to run around.”

After all Gabriel has been through, he’s now relaxing at home with Georgette, Gail and Gerie. They remarked, “He was near death when we found him. It’s a miracle he survived. He came with the name Gabriel and we thought that was perfect, so we kept it.” 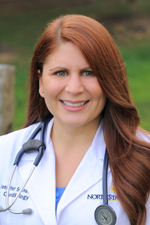 Jennifer Schneiderman, DVM, DACVIM (Cardiology)
Dr. Schneiderman received her Doctorate of Veterinary Medicine degree at Ross University in 2009 before moving back home to Long Island, New York where she completed a one-year rotating internship in small animal medicine and surgery at Atlantic Coast Veterinary Specialists in March 2010. After that, she completed a three-year residency in Cardiology at Atlantic Coast Veterinary Specialists in July 2013 and then stayed on there as a Staff Cardiologist until June 2014. Now a board-certified Veterinary Cardiologist, Dr. Schneiderman joined the NorthStar VETS team in August 2014. Her clinical interests include treatment of congestive heart failure and complex arrhythmias along with an interest in interventional procedures such as pacemaker implantation, balloon valvuloplasty and patent ductus arteriosus occlusion. Outside of work, Dr. Schneiderman enjoys traveling, scuba diving, going to the beach and spending time with her two tuxedo cats.

The information presented on this web site is not intended to take the place of your family veterinarian’s advice and is not intended to diagnose, treat, cure or prevent any disease. Discuss this information with your own veterinarian to determine what is right for your pet. All information is intended for your general knowledge only and is not a substitute for medical advice or treatment for specific medical conditions. We can not and do not give you medical advice via this blog. The information contained in this online site and emails is presented in summary form only and intended to provide broad understanding and knowledge. The information should not be considered complete and should not be used in place of a visit, call, consultation or advice of your veterinarian. We do not recommend the self-management of your pet’s health problems.
This entry was posted in Pets, Veterinary Medicine and tagged arrhythmia, basset hound, Gabriel, jennifer schneiderman, NorthStar VETS, pacemaker, third degree A V block, triplets, veterinary cardiology. Bookmark the permalink.