Sometimes, our stories, do have happy endings!Â  Today, I am sharing a guest written blog from our clients perspective on a case that was seen by our Internal Medicine department, more specifically Dr. Justin Guinan, and our technician Ann.Â  Please read on to see how the NorthStar VETS Team helped create a happy ending.

Case: “Phoebe” Thwaite is a 2-yr old female English Bulldog. She presented in March 2011 at 1.5 yrs of age for a one-month history of regurgitation (not holding down food or water), lethargy and dramatic weight loss. She had a megaesophagus (when the esophagus, the tube from the mouth to the stomach, becomes dilated, looses tone, and cannot transport food to the stomach,Â resulting in regurgitation) on x-rays.

Here is her story from the words of her mother:

My husband and I have been rescuing animals since we got engaged and moved in together about 10 years ago.Â  At one point, we had 4 dogs, 3 of them rescues, in the house.Â Â Â  We rescued all 3 as healthy animals, but they all eventually ended up with life-long illnesses that needed to be monitored.

Our Min Pin, Ricky, developed diabetes and would eventually go blind.Â  Jaq, our German Shepherd, had severe allergy issues and Exocrine Pancreatic Insufficiency (EPI).Â  And Nugget, our Chihuahua, who is still with us, has Addisonâs disease. 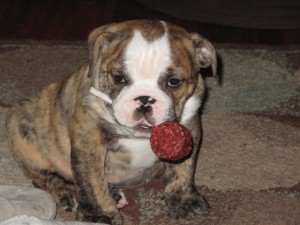 When it came time for a new dog, I wanted a Bulldog puppy.Â  Although we are still very committed to rescue, we were just looking to have a puppy that didn’t come with baggage and medical issues for a change.Â  I met Phoebe and that was it.Â  For the first year or so of our lives together, she was a typical puppy, but she also has a tremendous amount of personality.Â  I can be mad at her for eating our sofa one minute and laughing hysterically the next as she jumps in my lap and smothers me with kisses.Â  Everyone that meets her just loves her (ask your staff).

She turned one on October 1, 2010.Â  The following February, she started throwing up and I 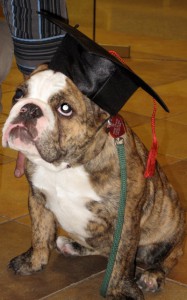 couldnât get any food into her.Â  My Chihuahua had been sick with a little cough just a few weeks earlier, so I thought she just had a virus like he did.Â  I took her to our local vet, Blackwood Animal Hospital, to get checked out and hopefully get some meds to settle her tummy.

That was the first time I heard the words, myasthenia gravis.Â  I was completely blind-sided with this possibility.Â  X-rays were done showing her enlarged esophagus.Â  There are very few reasons a dog would get an enlarged esophagus, and of course, the most likely reason, myasthenia gravis, is very expensive to test to draw that conclusion.Â  We were advised to try different things in order to get food into her stomach to see if this just went away on its own, which it could also do.Â  We took her home and tried everything – we fed her at an elevated level to have gravity help us; we danced with her around the kitchen after each meal; we had her sit like a person and hand-fed her.Â  Sometimes food would make it down, but most of the time it didnât.

Exactly one month to the day later, I took her back to our vet; we knew it was bad â she was skin and bones and just couldnât eat anymore.Â  They immediately told me she needed a specialist and Northstar VETS was one of three in the tri-state area that they recommend with an internal medicine vet on staff.Â  I made the appointment and took her up there the next day.

This was my first meeting with Dr. Guinan and Ann.Â  They were so nice.Â  I was very upset and my husband was traveling so I was alone.Â  Dr. Guinan took his time and explained everything to me about what he was going to do.Â  Of course, the first priority was to save her life.Â  She had lost over 20 lbs. in a month!

Dr. Justin Guinan did a special blood test called an acetylcholine receptor antibody test. This test diagnosed her with Myasthenia Gravis (an autoimmuneÂ disease that interrupts the way nerves communicate with muscles and causes muscles to become weak and not function correctly). Phoebe’s muscles around her esophagus were affected and she could no longer transport food and water to her stomach. She was hungry, and would eat, but could not utilize the food, causing her to loose weight rapidly. Â Essentially, she was starving.

They had to keep her for a few days as they scoped down her esophagus into her stomach and inserted a feeding tube.Â  They were also going to run blood work to rule out some other illnesses and of course run the test for myasthenia gravis.Â  When I left Phoebe that day, I really wasnât sure if Iâd see my puppy again. 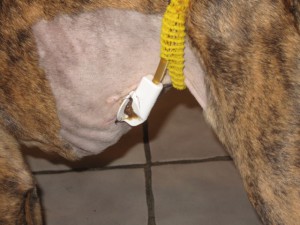 Dr. Guinan put Phoebe under anesthesia and placed a PEG tube (percutaneous endoscopically placed gastric feeding tube). The tube went into her stomach through her body wall and allowed us to put food, water and medication directly into her stomach. She was started on a medication called Mestinon to treat the Myasthenia Gravis and tube feedings for nutrition and weight gain. She did not receive anything by mouth to avoid regurgitation. 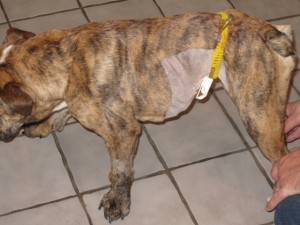 She stayed at NorthStar for a couple of days and then we went to pick her up.Â  My first look at her with the feeding tube was overwhelming.Â  Iâm not sure what I thought it would look like, but the way it protruded from her body definitely caught me off-guard.Â  We had very detailed instructions on what we had to do as far as feeding her and keeping her hydrated.Â  We also had three different medicines to give her.Â  She was to get nothing by mouth for a while. 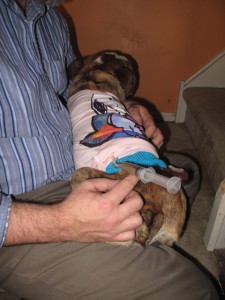 We were very stressed when we first brought her home.Â  She was to be fed 4x a day via the feeding tube, and she was to be given her medicine and water via feeding tube as well.Â  She had to be separated from the other dogs at feeding times and I had to keep her from the water dish they all use.Â  Her food had to be special ordered and mixed with water and inserted into the feeding tubes ahead of time.Â  We got her t-shirts that we cut to fit her properly.Â  The t-shirts helped hide the tube and keep it from getting caught on stuff and also to keep the other dogs from sniffing around. 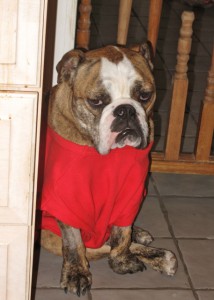 Feeling under the weather.

A week or so after she came home, we did get the results of her blood work â it was confirmed for myasthenia gravis.Â  Since that was the assumption that Dr. Guinan was working with given her symptoms, we were basically confirmed that we were treating her correctly.

The stress of dealing with her disease affected Phoebeâs personality as well.Â  My once happy puppy who just wanted to play with everyone, was very snappy with the other dogs, and her closest buddy, Bing, our new Min Pin, was actually scared of her for awhile.Â  In addition to knowing she was âdifferentâ with the feeding tube, she was also on prednisone, which I will swear contributed to her aggression. 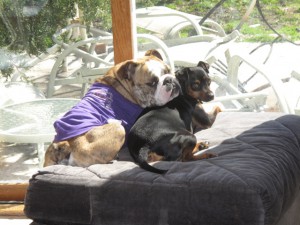 Support from a friend.

Dr. Guinan and I had bi-weekly calls to discuss her progression.Â  After a few weeks, she was drinking water and then we started giving her snacks here and there.Â  Jim said she was crabby because she lacked âflavorâ in her life.Â  But she was keeping the treats down too.

Phoebe eventually started putting weight on and we were eventually able to start stepping her down on the tube feedings as we re-introduced food to her by mouth.Â  We had to have the test for myasthenia gravis run again and the results were positive.Â  I was very anxious to get her off the tube all together, but Dr. Guinan wanted to proceed with caution.Â  He didnât want to be pre-mature in its removal only to have to put the feeding tube in again.Â  We started weekly visits to our local vet for a weekly weigh-in.Â  Amazing how quickly it can come off but it was slow to put back on.

As we made positive strides in getting her healthy again, she slowly got that special personality of hers back and became more social again. 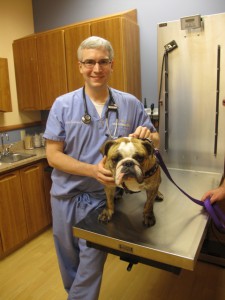 On July 31st, we brought her up to NorthStar and the feeding tube was removed.Â  It was a very happy day.Â  Sheâs still taking some of her meds but all her hair has grown back and sheâs making up for lost time with playing and causing trouble.Â  You would never know that just a few short months earlier we thought we were going to lose her!

We just celebrated 3 months of the tube being removed and while my Chihuahua isnât a big fan of hers, weâre all very happy to have her back with us and healthy.Â  It was a very scary few months, but the staff at NorthStar was very patient with us and helped to keep me calm and on track.

Dr. Guinan told me (after she was getting better) that itâs very rare that he gets to remove a feeding tube from a recovered, healthy dog.Â  So that day was pretty important for him as well, I assume. 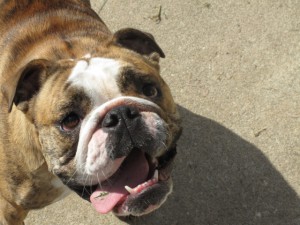 Over several months she began gaining weight, regaining her energy and eventually was allowed to eat on her own again. After proving she could eat and taker her medication by mouth without regurgitating, her PEG tube was pulled. She is now a happy, healthy, playful 2 yr old and her owners are thrilled to have their puppy back!