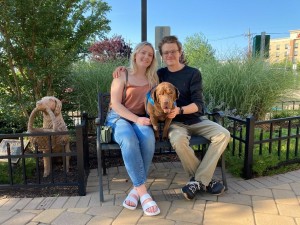 Mud, a six-year-old Sharpei dog, first had symptoms of a heart base tumor over two years ago when his abdomen began to fill with fluid (ascites). Using ultrasound at his family veterinary clinic, the primary care doctor found the cause to be a tumor of the right top chamber of Mud’s heart (right atrium), which backed up fluid traveling back from the abdomen through the main vein called the “vena cava.” He was treated with a 20 daily treatment protocol of intensity-modulated radiation therapy in January 2019. The fluid slowly disappeared as Mud’s heart base tumor reduced in size. Mud lived over two years after his initial therapeutic radiation treatment, and at age six, the fluid began to accumulate again. A recheck CT scan was performed, revealing that his heart base tumor was beginning to grow again. Stereotactic body radiation therapy (SBRT/SRT) was used for Mud’s second treatment course, which allows highly concentrated doses of radiation to be delivered with submillimeter accuracy over three consecutive days. Further, because advanced imaging utilizing the Varian Halcyon’s onboard cone beam CT scanner (CBCT), greater surrounding normal tissue avoidance for this second radiation treatment was achieved. Mud graduated from his SRT treatment on June 10, 2021 as the first patient to be treated at NorthStar VETS with PetCure Oncology, a nation-wide veterinary oncology care provider. We wish Mud a quick return to his normal quality of life and many more happy days at home! 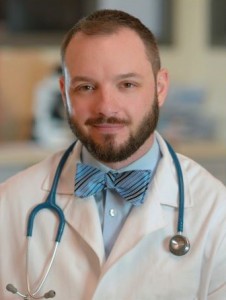 Rick Chetney, DVM, DACVR-RO
Rick Chetney is a native of central New York and has been practicing radiation oncology since 2013. He earned his DVM degree from Kansas State University in 2010, and completed a rotating small animal surgery and medicine internship at BluePearl Michigan Veterinary Specialists in 2011. Completion of a 12-month medical oncology specialty internship at the University of Tennessee in Knoxville followed. Dr. Chetney then worked as an emergency clinician at RIVER in Chattanooga before returning to the University of Tennessee and completed his residency in radiation oncology in 2015. He was board-certified in radiation oncology by the American College of Veterinary Radiology in 2016.

As a board-certified veterinary radiation oncologist, Dr. Chetney is one of fewer than 100 specialists practicing within his field in the world. He has a special interest in minimizing radiation side effects, skin healing, intensity-modulated radiation therapy (IMRT), and stereotactic radiation therapy (SRT/SRS/SBRT) for various tumors. He was the first on-site veterinary radiation oncologist to employ the use of linear accelerator-based IMRT in eastern Pennsylvania, and has practiced previously in the use of strontium-90 brachytherapy. After working in the Greater Philadelphia Region for five years, Dr. Chetney joined PetCure Oncology in June of 2020, and now provides his services to the patients and clients of Northstar VETS. He resides in Southeastern, PA with his wife, where they enjoy disc golf, kayaking, hiking, and anything outdoors. They are pet parents to Theo (Siamese/ragdoll mix cat), Logan (Border collie), and Roux (toy poodle).