When dogs attack! What happens when a gentle male Chesapeake Bay retriever gets in a fight with an aggressive dog and his wound is left untreated? He gets an exciting trip to the pet emergency room. 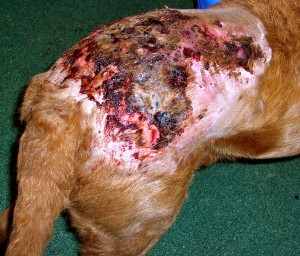 Morry when he presented to NorthStar VETS

His name is Morry. This special boy presented to NorthStar VETS Emergency HospitalÂ neglected, with a large serious bite wound that had gotten infected to the point that the tissue was black and dying. Morry had a fever and the infection was spreading quickly. He was going to need medical treatment that would be costly and consistent. Treatment would include debridement, skin stretching and multiple bandage changes along with antibiotics. 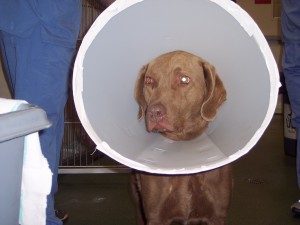 Morryâs medical treatment was not something that the owners were willing to proceed with and were leaning towards euthanasia. Â As a result, Emergency Veterinarian, Dr. Stacy Rebello was able to convince them to leave Morry overnight.Â  During this time, the âWho can care for Morry campaign began throughout the hospital?âÂ  The hospitalâs foundation Vet-I-Care quickly mobilized to A.) Help fund the medical expenses Morry needed and B.) Find him a new home. Now, finding pets homes isnât something that NorthStar VETS typically specializes in but, what we do specialize in is compassion, and under these circumstances we felt 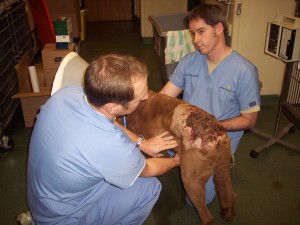 compelled to help Morry any way we could.Â  As luck would have it, Morryâs happy personality sold himself. Because his hospital stay was long he became the apple of his soon to be new mom’s eye. Jen learned of Morry by passing by his run at NorthStar. Who could resist his wagging tail and upbeat social demeanor? Even with so much to endure he was happy all of the time! So with some inquiry Jen found out his plight and his need to find a new home. After, bringing her family to meet Morry, they voted.Â  They came back with a unanimous yes! Jen chose to adopt him and became his caring representative. Morry was just what her family was looking for. However, Morry wasnât out of the woods yet, he still needed to have two surgeries.Â  The severity of his wounds could mean he would potentially need skin grafts. Â To our surgeon, Dr. Garrett Levinâs surprise he was successfully able to close the wound.Â  While still under anesthesia, our ophthalmologist, Dr. Kristina Vygantas, removed two eye masses as well.Â  Finally, just a few days after Christmas, Morry went home to enjoy his new family. 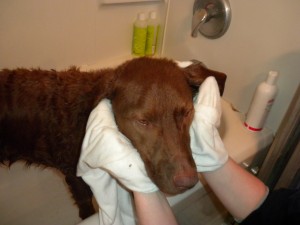 Charlie gets a bath from mom

When Morry went home he never really responded to his name âMorry,â and therefore his new family changed his name to Charlie to which he seemed to like better.Â  Today, Charlie lives a happy, healthy life with his new family.Â  (He even still likes other dogs despite his unfortunate incident.) 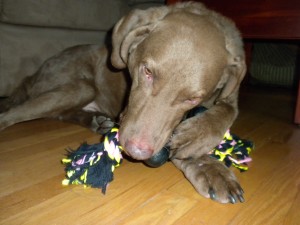 Charlie and one of his favorite toys!

NorthStar VETS along with Vet-i-Care became the lifeline Morry needed to give him a second chance at a new life. With a compassionate caring veterinary team and the Vet-i-Care foundation at his side he received the care, treatment and medications he needed to get him on the road to recovery. The moral of this story is that at NorthStar VETS we are compassionate, and we work together as a team.Â  Our entire team of emergency vets, surgeons, ophthalmologist and the rest of the gang worked hard to make sure Morry (now Charlie) got the happy ending he deserved.