The team at NorthStar VETS is doing innovative and amazing things every day as they work to advance the level of care available to your pet. This series of posts highlights cool cases at NorthStar VETS and the types of things done to save pets and improve their quality of life. These are cases using innovative and cutting-edge medical techniques, and/or stories of pets beating the odds. This is the story of Abby, a patient of our Surgery team. 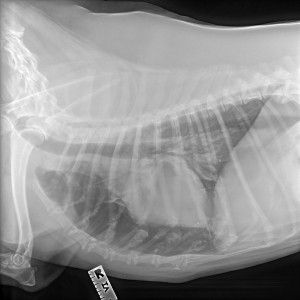 About Abby
Abby is an 8 year old Samoyed who initially presented to NorthStar VETS for 5 days of coughing and an episode of falling where she was suspected to hurt her wrist. She was taken in through the Emergency service, who did not find any significant abnormalities with her forelimb. They did notice, however, that her breathing was somewhat labored. Radiographs of her chest were taken which showed a large volume of free air within the thoracic cavity (“collapsed lung.”) (Fig 1). Pneumothorax is a very serious problem that can result in death if not treated appropriately.

Abby’s Condition
In order to allow Abby’s lungs to expand appropriately, the emergency doctors performed a thoracocentesis, a procedure in which a small needle is inserted through the chest wall to remove the trapped air. She tolerated the procedure well, but then built up more air rapidly. The recommended course of action at that point was a CT scan to look for any areas of the lung that might be damaged, allowing the air Abby was breathing to collect within her chest cavity. There are several possible reasons why a lung lobe might leak air. Diseases in which the lung tissue is unhealthy (and thus “leaky”) such as cancer or severe pneumonias/abscesses are one cause. Trauma can also damage lung tissue and cause air leakage. Another possibility is the formation of a bulla or bleb, which can then rupture and leak air. 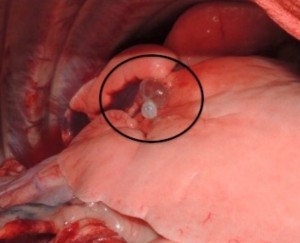 Lung bullae or blebs (Fig 2) are areas of the lung where air collects under the lung tissue covering (viscera) or within small areas of the lung itself. These areas are more delicate than normal lung tissue, and can rupture, leading to a massive volume of air collecting in the thorax. Certain breeds are more predisposed to developing pulmonary bullae or blebs, such as Arctic breeds (Huskies, Samoyeds, etc.) There is usually no known cause of these areas forming. 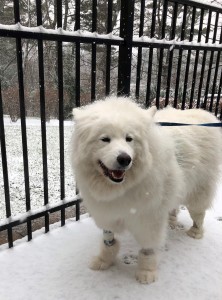 Abby’s Treatment
Occasionally, lungs that are leaking can seal over on their own if the air is removed, making more aggressive intervention unnecessary. However, if the air is quickly leaking and collecting, surgery may be needed to stop the leak. Abby’s air was collecting very fast, and her initial chest radiographs did not show any definitive cause for the problem. A CT scan was performed under general anesthesia. On Abby’s CT, there was no evidence of cancer or pneumonia. There were no definitive blebs or bullae, but a few areas that appeared slightly abnormal. Abby’s owner and the surgeons discussed options, which included waiting to see if her lungs would seal over on her own as there were no definitive lesions, or exploratory surgery of her chest. Abby’s owner and the surgeon elected to do exploratory surgery of Abby’s chest, which required a median sternotomy (in which a surgical saw is used to section the bones in the middle of the chest, giving us access of the entire chest.) It was found that Abby had three abnormal areas of blebs/bullae, one of which was actively leaking air (see video below). All three areas were resected with the Ligasure, a vessel-sealing instrument that is useful also for sealing lung tissue on the periphery. After removal of all three areas, the air leakage had stopped. A temporary chest tube was placed to remove any fluid that collected postoperatively. Abby’s chest was repaired with surgical wires, and she recovered well in the ICU. 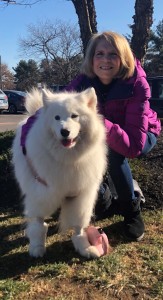 How Things Went for Abby
The day after surgery, Abby was up, walking, and eating. She was breathing very well and her chest tube was removed. Abby was discharged to the care of her owner 2 days postoperatively and continued to do well at home. Abby came back in for her suture removal two weeks later, and was completely back to normal at home.

Learn more about the Surgery service at NorthStar VETS 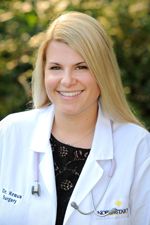 Kelly Kraus, VMD, DACVS
Dr. Kraus is originally from Connecticut. She obtained a Bachelor of Science degree from Loyola University in Baltimore, Maryland in 2003 before moving to Philadelphia, where she did molecular genetics research for two years at the University of Pennsylvania. Dr. Kraus then completed veterinary school at the University of Pennsylvania in 2009. After graduating, she completed a rotating internship at Oradell Animal Hospital in Paramus, NJ. She then moved to Texas to complete a one-year internship in surgery at Gulf Coast Veterinary Specialists. She was fortunate to then move back to New Jersey for a three-year residency in surgery at Red Bank Veterinary Hospital, which she completed in 2014.

She is excited to be part of the surgery team at NorthStar VETS. Her special surgical interests include, but are not limited to, wound management and reconstructive surgery, surgical oncology, cardiothoracic surgery, and hepatobiliary surgery. Dr. Kraus also enjoys management of orthopedic conditions. She is trained in the tibial plateau leveling osteotomy (TPLO) for cranial cruciate ligament disease. Outside of work, Dr. Kraus enjoys spending time with her family, cooking, traveling, and helping her local SPCA.

The information presented on this web site is not intended to take the place of your family veterinarianâs advice and is not intended to diagnose, treat, cure or prevent any disease. Discuss this information with your own veterinarian to determine what is right for your pet. All information is intended for your general knowledge only and is not a substitute for medical advice or treatment for specific medical conditions. We can not and do not give you medical advice via this blog. The information contained in this online site and emails is presented in summary form only and intended to provide broad understanding and knowledge. The information should not be considered complete and should not be used in place of a visit, call, consultation or advice of your veterinarian. We do not recommend the self-management of your petâs health problems.
This entry was posted in Pets, Veterinary Medicine. Bookmark the permalink.