From the Client Perspective: My Dogs are Blood Donors

From time to time, we share stories from the client perspective, giving insight into some of the thousands of stories that take place at NorthStar VETS every day. This is the story of three greyhounds who have found a new home together and a chance to give back.

“After losing my first retired racer to osteosarcoma in September 2015, I received a call from Linda Lyman, the president of the greyhound adoption group I volunteer with, Greyhound Friends of NJ. Although it was only a month after saying goodbye to my Lou, I felt compelled to say yes to a new dog. He had a one-word name like Cher or Bono – ‘Tytin.’ After hanging up, I fired up my computer and researched Tytin on a website which lists racing greyhound pedigrees and racing records. It was then I discovered I had a new dog to fill the space in my heart left when Lou crossed the Rainbow Bridge. You see Tytin’s dam’s (mother’s) name was Skippy Lou. Needless to say, he fit perfectly in my home as if he had always been there.” 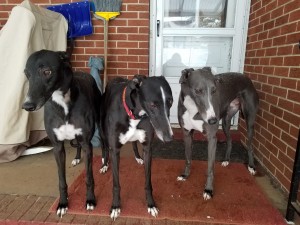 Jack, Raven and Tytin on the back porch

“One of the many benefits of adopting a retired NGA (National Greyhound Association) racing greyhound is that you can research their pedigrees and siblings. And through the internet and social media, you can make contact with their breeders and trainers who knew them before they came to your couch. In my case, I was able to see that Tytin had four other littermates, three of whom were still racing. I followed the other littermates’ racing careers. Over time, as Tytin’s siblings became adoptable, I was able to reunite three out of the four of them!” 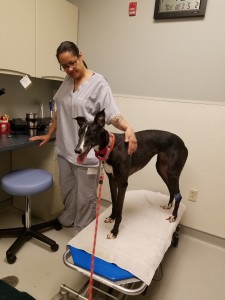 Raven is ready to make her donation

“I regularly bring my dogs to NorthStar VETS to donate to their canine and feline blood bank, and my three greyhounds were in recently for their donation. The blood bank utilizes healthy dogs and cats who can help less fortunate animals by donating blood. Many pet parents aren’t aware that, just as in human medicine, blood products can be a life-saving resource for critically ill or injured pets. You can learn more about the program at the Blood Bank portion of their website.”

Think your dog or cat could be a blood donor? Take the online pre-screening test.

One Response to From the Client Perspective: My Dogs are Blood Donors