Coco to Warm Your Heart 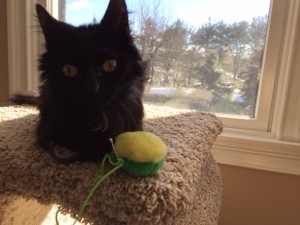 Coco came quickly into Gail’s life. One afternoon, Gail was busy taking care of her human patients at work at Robert Wood Johnson when a coworker found a young stray cat and wanted to find it a home. When the cat was offered to Gail, she immediately said yes and brought Coco home to meet Gracie, her seven-year-old cat. They were fast friends.

Soon after that, Coco was taken to see his family veterinarian for a procedure. Things seemed to go well until the next night at home when Gail awoke to the sound of banging in a different part of the house. Upon investigating, Gail found Coco walking into furniture and looking confused. “Was he blind?” she thought to herself. In panic, she made the decision to bring Coco into NorthStar VETS to get checked out.

Within minutes of arriving and checking in, Siobhan, a technician at NorthStar VETS, was seated beside Gail. “She was so good to me,” Gail exclaimed. In this moment, Gail was in shock and feeling guilt-stricken at the thought that her cat may be blind. Although Coco had suffered a seizure, Gail wasnât sure what was going on and whether heâd make it. “Siobhan took care of me right away and put my mind at ease. Dr. Tasker, who examined Coco, was amazing and did the same.” It seemed that Coco had a neurological problem that was destined to come out eventually, but going under anesthesia brought it to light sooner. That’s when Dr. Gaemia Tracy of the Neurology team took over the case the next day.

“Dr. Tracy called me on Monday morning, and thatâs when I accepted that Coco didnât have a quick fix in his future, but did have hope.” It was recommended that Coco have an MRI of his brain to see what was going on, and Gail knew what she had to do. She approved the testing and awaited the results. Later that day, Dr. Tracy called. “It looks like Coco has an inflamed brain due to immune-mediated Meningioencephalitis.” This meant he would be in the hospital’s Intensive Care Unit for more than two weeks to undergo treatment and recovery.

Gail came to visit Coco every day in the ICU, and sometimes twice a day when she could do it. “They never rushed me and let me stay and hold him as long as I needed. Everyone got to know me and Coco. The receptionists greeted me warmly each day, the nurses showed me respect, and I never felt like I was a bother to anyone.” In spite of that, Gail was still feeling unsettled. “The waiting was excruciating,” she admitted, “and going to work was the only time I could take my mind off things.” Her coworkers were empathetic and offered support through the ordeal. Finally, after two long weeks, she received the phone call from Dr. Melanie Puchot of the Internal Medicine service she was waiting for. “Would you like to take him home today?” she asked.

Gail was ecstatic because she couldnât wait any longer to bring him back home. “I just wanted him close to us,” she said, “and I was willing to give him the continued care at home that he needed. I gave him his three different medicines each day without issue and helped him find his new normal at home.” Coco is still mostly blind, and figuring out how to navigate around the house. Gail is holding out hope for the future that by sixteen weeks, he will regain more vision. 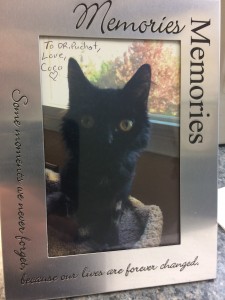 For much of this time and especially since then, Gail and Coco have been back to see Dr. Puchot for continued additional care. “They donât come any finer!” Gail gushed. She really connected with Dr. Puchot during her visits and the feeling was mutual. Dr. Puchot now proudly displays a framed photo of Coco on her desk and said, “this was one of my favorite cases this year because I connected so deeply with Coco and Gail.” Dr. Puchot was happy to get to know Coco and help in a big way with this case.

By this point, Gail was slowly getting used to her new pace of life with Coco at home. “I feel so good now,” Gail continued, “we got through it, and I couldnât have done it without the team at NorthStar VETS. Every person was pleasant, and I hope to give the patients I work with the same level of care! When youâre giving great care, you have to take your time and be present with people, and NorthStar VETS gets that. They treat people well!” 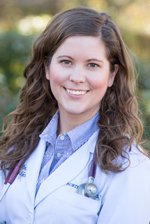 Melanie Puchot, DVM, DACVIM
Dr. Melanie Puchot is a Texas native who received her veterinary degree from Texas A&M University College of Veterinary Medicine in 2013. After graduation, she completed a small animal rotating internship at Cornell University in Ithaca, NY. She then returned to Texas A&M University and completed a 3-year residency in small animal internal medicine in 2017. She has a special interest in endocrinology, nephrology and interventional endoscopy / radiology. Dr. Puchot is excited to join the team at Northstar VETS.