From the Client Perspective: My Dog was Diagnosed with Kidney Disease

From time to time, we will share stories from the client perspective, giving insight into some of the thousands of stories that take place at NorthStar VETS every year. This is the story of Butterscotch, who was diagnosed with kidney disease. 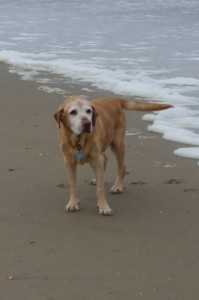 Butterscotch was bleeding from his mouth one day, so I called my family veterinarian. The technician suggested that maybe he had a broken tooth, but the bleeding continued, so I brought him in. One of the associate veterinarians immediately looked at him. There was concern about cancer, but after some tests it turned out to be chronic kidney failure. Butterscotch was given some medicine to control the bleeding and sent home.

A couple of weeks later, over the weekend, Butterscotch continued to bleed on and off as he tried to eat and drink. He continued to remain very weak and something was not right. Monday morning, I called my family veterinarian. After a second examination, his numbers were worse than on my initial visit and his situation was more serious. My family suggested I get him to NorthStar VETS right away. We were on an emotional rollercoaster, but we were ready to fight for the health of our precious family member.

When he presented to NorthStar VETS a few days before Thanksgiving, his numbers were dangerously high from all the blood loss and they were worried about his condition after five days of dehydration and anemia. They kept him for two days and after 37 hours of IV fluids and a blood transfusion, his numbers were much better. We brought home a happy and excited dog. The staff from top down at NorthStar VETS could not have been more honest, attentive, friendly, concerned, and supportive. I was overwhelmed with gratitude. 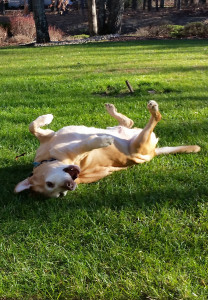 A week later, he was doing well and went for a recheck and his numbers were settling down to present a true picture of his kidney disease. Dr. Anderson at NorthStar VETS suggested a renal diet and fluids at home. Five months later, Butterscotch is doing very well with the subcutaneous fluids.

Thank goodness I took him to NorthStar VETS and he is being treated and monitored for kidney failure. NorthStar VETS didnât just save my dog; they saved a member of our family!