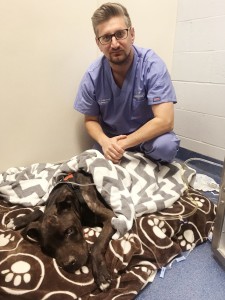 Jose considers himself a man of faith, a faith which was tested recently when his dog was lost for two days under a building collapse in Philadelphia. Fortunately, his story didn’t end there. Watch the news stories which cover the first half of Magic’s saga at NBC and 6ABC. You’ll see in these videos Dr. Jason Coggeshall of the NorthStar VETS Surgery service examining the dog. Dr. Coggeshall doesn’t live too far from Jose and Magic, so as soon as he heard about what happened, he rushed over to help.

Jose was beside himself after thinking that he lost his dog, then miraculously getting him back. “A piece of my heart went away when I tried to find him, but couldn’t. I had a dream that he was still with me, but I was starting to think he was gone.” Jose still remembers the flood of emotion that came over him when the construction crew called him to tell him they uncovered Magic and he was still alive. “I immediately broke down crying. He’s always been a fighter, I just had to keep the faith and give him a chance.” Jose called his family to rejoice. 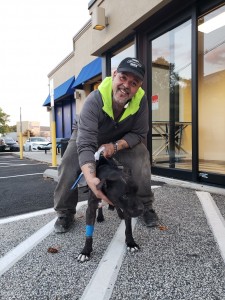 Jose and Magic leaving the hospital to go home

Shortly thereafter, Dr. Coggeshall was there to examine Magic and encourage Jose to bring him to NorthStar VETS in Maple Shade. “He was severely dehydrated, had head trauma, and needed care right away” Dr. Coggeshall reported. Jose took the advice, loaded Magic into his car, and brought him in. Magic received fluids and care for a couple days after his ordeal, then was discharged to go home with his family.

“It’s about helping each other,” said Dr. Coggeshall, “because I’d want someone to do that for me.” Jose felt similarly. “I help people with their cars. Helping others is so important to me, which is why I was so grateful for Dr. Coggeshall and my neighbors who rallied around me. Magic is like a son to me, I am so attached to this dog. I trained and taught him to be kind and he loves other people the way I love him. I am so happy he’s home.” 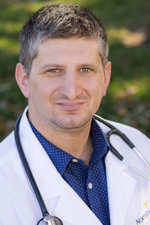 This entry was posted in Pets, Veterinary Medicine. Bookmark the permalink.

4 Responses to Believing in Magic